Is the pope Catholic?

This is one of the most pressing questions of our time. It has become a rhetorical device of something too obvious to consider. However, nothing is too obvious. Creation Science is the discipline that is totally unbiased and prepared to tackle even the most common preconceptions with a novel, fresh and bold approach. We have done that. We now have the answer. It is “no“!

Catholics are not Christians but they claim they are. Thus, we start by the minimal list of things required for Christianity:

Now let us turn to Pope Frances and look at these things and many others in our quest to answer if he is Catholic.

The Pope does not think that Jesus is required for Salvation. Frances says, in fact, that you can be an unbeliever and go to Heaven.

You ask me if the God of the Christians forgives those who don’t believe and who don’t seek the faith. I start by saying – and this is the fundamental thing – that God’s mercy has no limits if you go to him with a sincere and contrite heart. The issue for those who do not believe in God is to obey their conscience.

This contradicts Jesus’ very own words:

John 14:6
Jesus saith unto him, I am the way, the truth, and the life: no man cometh unto the Father, but by me.

In fact, Frances says that the Trinity is obsolete and can be disposed of! He endorses Jew and Muslim Salvation (apparently ignorant of, e.g., John 14:6).

The plan of salvation also includes those who acknowledge the Creator, in the first place amongst whom are the Muslims; these profess to hold the faith of Abraham, and together with us they adore the one, merciful God, mankind’s judge on the last day.

This gives us the first hint about Frances’s true affiliations. Frances says that the Muslims come “first and foremost”. This is a clear sign of the Pope’s true loyalty! In his opinion Muslim Grace >>>> Christian Grace. This can also be seen in the following image, where Frances licks the feet of a Muslim man.

We have now established that Frances is not a Christian nor a false Christian catholic! What is he then? The suggestion of Muslim heritage is very powerful but as unbiased Creation Scientists we must look for other evidence. I’m sorry to tell you that it is there. The case is waterproof.

Conclusion: The Pope is not a Christian. What is he?

Frances says that the idolatrous deity of evolution and the Big Band demiurg are the truth.

The theories of evolution and the Big Bang are real and God is not “a magician with a magic wand”, Pope Francis has declared.
Speaking at the Pontifical Academy of Sciences, the Pope made comments which experts said put an end to the “pseudo theories” of creationism and intelligent design.

The scientific evidence available to us tells us that the beginning of life was in an environment similar to swamps, which are composed basically of water and and earth matter. This produced clay, where the first forms of life began in the form of single cell organisms. These organisms multiplied reproducing themselves first by splitting and division. However, later, they paired as males and females to reproduce as they took other life forms in the sea and on land. Reproduction has become in the form of uniting the watery genetic materials of males and females, as the following verse (32.8) reveals.
32.8. Then He made his offspring from a quintessence of despised water (coming out of parents).

Both disregard Genesis 1, the historical account of God’s Creative activities 6000+ years ago!

Genesis 1:24
And God said, Let the earth bring forth the living creature after his kind, cattle, and creeping thing, and beast of the earth after his kind: and it was so.

This is not a surprise, Frances in in good terms with Muslim leaders, consumes their every word of blasphemy and listens to their false teachings as proven by this image: We know that all there is to know is in the King James Bible. Frances says that the Bible is insufficient and we need “tradition”!

The task is to determine what constitutes authentic tradition. How can we know which traditions are apostolic and which are merely human? The answer is the same as how we know which scriptures are apostolic and which are merely human—by listening to the magisterium or teaching authority of Christ’s Church. Without the Catholic Church’s teaching authority, we would not know with certainty which purported books of Scripture are authentic.

What Frances says is that Jesus is a nincompoop who cannot deliver His commandments in plain American but needs the Vatican to twist His words. This is exactly the same as the Muslim “Hadith“, tradition of the sayings of their Demon Muhammad. Well, God and Jesus disagree!

2 Peter 1:20
Knowing this first, that no prophecy of the scripture is of any private interpretation.

The picture is emerging of a conspiracy that has lasted for centuries. This conspiracy is between the “Catholics” and the “Muslims” and one of its principal manifestations is to build an organization that allows continuous sodomy of boys. The Catholic “Church” chose the tradition (sic!) of priesthood to propagate this practice.

In fact, the Catholic Church has a 2,000 year history of sex abuse. In their acclaimed book, Sex, Priests and Secret Codes(2006), Father Thomas Doyle, with former monks Richard Sipes and Patrick Wall, used its own documents to confirm the Church’s 2,000-year problem with clerical sex abuse.

The Pope, as expected, dismisses the Bible.

Matthew 18:6-7
But whoso shall offend one of these little ones which believe in me, it were better for him that a millstone were hanged about his neck, and [that] he were drowned in the depth of the sea.

Again, this is the same as the age-long practice in the Muslim world called
“Bacha Bazi“. There is absolutely no difference. Here we can see the pope kissing an alluring young boy. 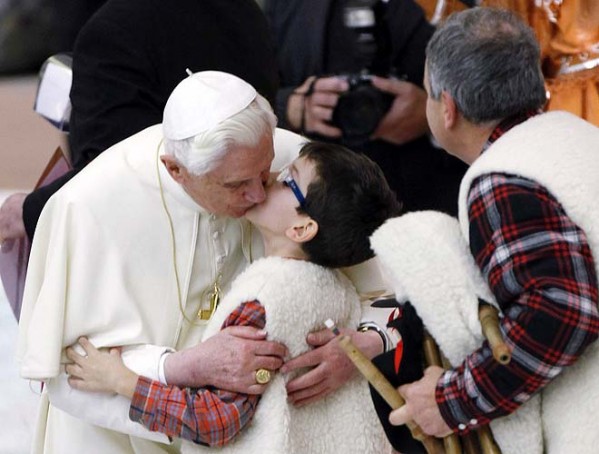 And here the same with a Muslim leader:

Throughout history, 99% of all terrorist acts have been conducted by either Catholics or Muslims. On the Catholic side we have the IRA, the ETA, and many others. On the Muslim side, there is Al-Qaeda, ISIS, and many others. We know what Jesus thinks about these people:

John 8:44
Ye are of [your] father the devil, and the lusts of your father ye will do. He was a murderer from the beginning, and abode not in the truth, because there is no truth in him. When he speaketh a lie, he speaketh of his own: for he is a liar, and the father of it.

Conclusion: The Pope is a Muslim. What KIND of a Muslim?

Frances is, in fact, worse that old honest hard-core Islam. He is a Liberal. At least traditional expanding Islamists have some thoughts that preserve the possibility of Repentance and Salvation.

A. They DO believe that Salvation requires faith!

Obviously, Jesus is missing, but the Pope dismisses also God (as seen above) and accepts atheist salvation.

B. Proper Muslims abhor sodomy (at least in theory, while we have seen that in practice they do not miss an opportunity to penetrate young males):

And [We had sent] Lot when he said to his people, “Do you commit such immorality as no one has preceded you with from among the worlds?(80)Indeed, you approach men with desire, instead of women. Rather, you are a transgressing people.”(81) Al-Araf 80-81

In contrast, Frances (as seen above) endorses sodomy and promotes it.

Conclusion: The Pope is a Muslim but a liberal one.

What does this mean? It means that Islam and Catholicism are not separate religions. They are the same and the differences are only very superficial. They are a part of the conspiracy to please the desert nomads with heavily-clad women, the Mediterranean uneducated masses with images and statues of Mary (yes, the Muslims worship her, too), in front of which the catholic men can engage in continuous self-abuse. They are organizations with the now exposed agenda of young-boy sodomy. And there are 2.85 billion followers of this false religion that we should call either “Cathoslam” or “Islicks”. This is the largest conspiracy EVER. Now we know and can fight it. Jesus also knows and supports us.