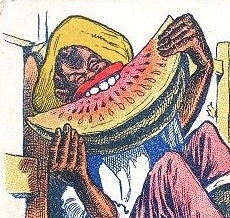 I have spent years observing and studying the Negro race. I cannot help it. They fascinate me. Some people have accused me of racism because of my insights, while others call me a Negrophile. I prefer to think of myself as a Negrologist.

We know that this race is descended from Noah’s son Ham, a parentage reflected in the terms Hamite and Hamitic. Ham looked upon his father’s private parts when Noah was in a drunken stupor, then told his brothers, and when Noah awakened he cursed Ham’s son Canaan to be the servant of Ham’s two brothers: Shem, the ancestor of Arabs and Jews, and Japheth, the ancestor of whites. Many theologians believe that this curse has carried over from generation to generation down the entire Hamitic line, which means that the re-enslavement of blacks is Biblically justifiable, if not exactly wise from a socio-political-economic point of view. There is still much we don’t know about what happened that night in the tent, and all of it has relevance today.

20 And Noah began to be an husbandman, and he planted a vineyard:

21 And he drank of the wine, and was drunken; and he was uncovered within his tent.

22 And Ham, the father of Canaan, saw the nakedness of his father, and told his two brethren without.

24 And Noah awoke from his wine, and knew what his younger son had done unto him.

25 And he said, Cursed be Canaan; a servant of servants shall he be unto his brethren.

26 And he said, Blessed be the Lord God of Shem; and Canaan shall be his servant.

27 God shall enlarge Japheth, and he shall dwell in the tents of Shem; and Canaan shall be his servant.

What exactly did Ham do? Genesis 9:24 says that Noah “awoke from his wine, and knew what his younger son had done unto him,” but all we know for certain is that he saw his father in the nude. The way the incident is worded, it seems like it could have been an accident, yet Noah was angry enough to curse Canaan and most likely all of his descendants. Did Ham molest or sodomize his father? Honestly, I have no idea. Bible scholars have debated this since the dawn of time. As a woman, I am forbidden from teaching or interpreting the word of God (1 Timothy 2:12), so all I can offer is idle speculation. If Ham did perform sexual acts on Noah, or desired to do so, it could explain the “down-low” phenomenon among modern-day blacks. Studies show that while blacks are less likely than other races to identify as “gay,” homosexual behavior is shockingly common in their community—especially in prison, where most of them live. Blacks in general can be characterized as hypersexual, a fact so obvious it should be noncontroversial. Practically everything they do is fueled by their libido. You know exactly what I mean if you have ever seen a rap video, been to “da club” (God help you!), or been subjected to the black male hooting and hollering that would constitute verbal rape were it in any way intelligible.

Their anatomy and physiology are consistent with this. They mature earlier than whites, have higher testosterone, and possess exaggerated sex characteristics: pendulous breasts and swollen buttocks in the females, frighteningly large penises in the males. Science has proven that they are genetically wired to contract AIDS. The only thing that comes more naturally to them than sex is violence. Oftentimes, they seem more animal than man. Did the curse make them that way? It was levied by Noah, and the Bible doesn’t say for sure whether God backed it up. Or were they cursed for the savagery that was already in their nature, presumably dating back to the fall of man? Was it Satan himself who imbued the Negro with his licentiousness and brutality? That would explain their unnatural skin color, as what else but Hellfire could blacken an entire race, kink its hair, and fill it with the fear of water? There is something very primal and chthonic about blacks, and unlike secular racists, we cannot simply chalk it up to them being “less evolved.”

What I am absolutely certain of is that God, in His infinite kindness and wisdom, blessed the Negroes with a saving grace: their low IQ. Yes, it is okay to say it. American blacks have a borderline-retarded average of 85, Africans a woeful 70. In comparison, most third worlders score in the 80-range, gorillas and the Irish come in around 90, and white countries top out at 100 or so. Orientals score even higher, but since they “rie” and cheat at everything else, it’s safe to assume they’ve gamed the system. Only Australian Aborigines are dumber than blacks, and that ain’t saying much; even Abo beauty queens look like they wandered off the set of Harry and the Hendersons. Is this a bad thing?

Look at the supposedly smartest race, Orientals. They’re all atheists (yes, Buddhists are atheists too). Research shows an inverse relationship between religiosity and IQ. In other words, the smarter you are, the less likely you are to be religious. While there are major exceptions (Christopher Langan, the smartest man in the world, believes in God), I think these figures by and large are pretty accurate. Of course, these were Jew-funded studies almost certainly intended to make Christians look dumb, but what they really say is that being highly intelligent is bad, because it makes you more likely to go to Hell.

I believe that the dull mind of the Negro is uniquely suited to Christianity. Look at Uganda, where homosexuals are hounded, publicly humiliated, and threatened with execution. What white country would dare enact such a policy? Only Russia comes close. But there is a world of difference between banning sodomite propaganda from schools and actually, legally hacking their heads off and kicking them into a ditch. Negroes don’t need silly things like “facts” or “evidence” to believe in Christ. Few of them can even read, so they won’t go digging through the Bible for contradictions or misinterpreting passages. They’ll do whatever da preacher man tells them. Simply put, the Negro may be the perfect Christian—in theory.

Of course, the number of American blacks who are True Christians™ is vanishingly small. This is mostly because of the horrible ghetto thug culture that the MSM pushes relentlessly and the sex-crazed, bling-blangin’ “reverends” who are little more than rappers in robes. But do not despair. Landover’s Ex-Negro Academy is hard at work churning out the next generation of religious leaders for black America, and fine men like Pastor James David Manning will soon be the norm, not the exception.

It is tempting and easy to hate blacks. Sometimes it seems like they are daring us to hate them, to curse them, beat them, spray them with firehoses, sic dogs on them, shoot them, and hang them. However, that is not what Jesus would do. Racism—real racism, not the boogeyman lefties conjure up every time a pickaninny fails a spelling test—is undoubtedly a sin.

Nor thieves, nor covetous, nor drunkards, nor revilers, nor extortioners, shall inherit the kingdom of God.

Will anyone fully understand the Negro in our lifetime? I doubt it. Nearly everything about them, from their dark origins to their bizarre behavior to whatever the heck that smell is, is an enigma. But I do think we should try to appreciate them for the positive qualities they possess. As I said, they can be molded into fine Christians. They also have an impeccable sense of rhythm and can put a shine on your shoes like nobody’s business, assuming you go to the right street corner (Heaven help you if you end up on the wrong one).

Perhaps I am being too hard on them, or too forgiving. What do you think? I am especially interested in hearing from any blacks who managed to read this.

Replies:
anthonyijackson (10-05-2018 10:39 PM): There's no real evidence that the descendants of ham were black though... Also, there is more than one type of black person. ...
Mary Etheldreda (11-05-2018 01:37 AM): There's no real evidence that the descendants of ham were black though... Sure there is! You might find Landover Baptist Church Senior Pastor Billy-Reuben's sermon most helpful: Where did the races come ...
Ted Jones (19-12-2018 05:26 AM): Virginia D. Templeton;1163161 Perhaps I am being too hard on them, or too forgiving. What do you think? I'm especially interested in hearing from any blacks who managed to read this. I tried staying away ...
Heavenisbest (11-07-2019 07:58 PM): I don't think for a second this is a real post. No black person would ever write this. The problems you talk about are not black problems. They are sin problems. There is tons of sexual abuse in all ...
Esther B. (11-07-2019 09:13 PM): No race is better than another....except Jews of course who we become upon salvation. Where exactly does the Bible say that? If you're going to make ridiculous statements like that, you need to make ...
Heavenisbest (11-07-2019 11:11 PM): Where in the Bible does it tell us that either blacks were inferior or whites were superior? Do you not recall all the countless times Israel and Jerusalem are mentioned in both the Old and New Testaments, ...
Show all 30 replies.