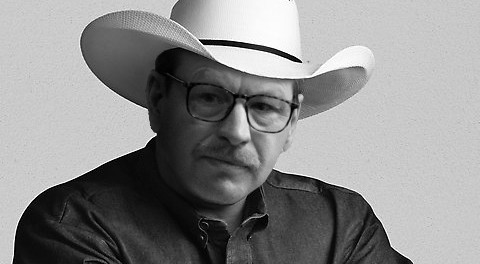 His mustache is grey now, his voice a little huskier than when he first took the stage three decades ago. His face looks more than ever like it was hewn from the Rockies. But there’s plenty of fire left in Roper Crossburn. At 58, the Iowa singer-songwriter remains a force in the world of Christian country, with a new album and tour on the way as well as a song that he hopes will become a part of the presidential race. Ask him yourself, and he’ll tell you he’s just getting started.

“This is the best record I ever made,” says Roper. “All the other ones, they were good, but this is the best.” He pauses and stares, and for a moment appears gripped in a spasm of anger. Then he continues. “It’s better than the others.”

Arriving December 18, Real Men Love Jesus is prime Crossburn: fifteen tracks of joyous worship and incisive social commentary, seasoned with a pinch of righteous rage. Though his guitar playing will not be confused for Clapton, the licks come sharp and clean, creating a vintage country sound that suits his voice and lyrics. A rich vein of sociopolitical awareness runs through his work. With an eye for wit and satire, he delivers his unabashedly right-wing point of view in a melodic rumble that some have likened to the Man in Black. Roper, however, dismisses such praise.

“Johnny Cash is in Hell,” he says. “He sang songs by Trent Razor and Tony Danzig—Satanists. I heard he was a drug addict too. Don’t ever compare me to that devil.”

Indeed, his main influence is a different JC.

“One hundred percent, Christ inspires everything I do. Most popular music is made by queers, so I don’t listen to it. I tore the radio right out of my truck. Now I keep my Bible and my gun there.”

Crossburn is proudly old-fashioned. While today’s country stars tweet incessantly and take selfies onstage, Roper doesn’t even have a cell phone. He forgot his email password years ago and deleted his Facebook after getting too many likes from black people. Recoiling at the sight of Luke Bryan in skinny jeans, he says he’s worn the same boot-cut pair since the eighties; ditto for the boots themselves, which have been re-soled a dozen times. “A fellow did tell me last week that I had a great sense of style,” he says. “I told him to get lost or he’d be spitting up teeth.” Crossburn in high school (left) and the eighties (right)

Born Silas Lee Crossburn to Arkansas working folks, Roper spent his early career in bars, playing lurid songs awash in sex and booze. He briefly charted with 1986’s “She Had It Comin’,” but personal troubles held him back from lasting success.

“I was lost,” he says with disarming candor. “Fighting, smoking dope, even whoring. I used to scrub my private parts with bleach to try and wash away the whore juice. I hated everyone I met, and I didn’t know why.” While jailed on battery charges in 1988, he found a copy of the Bible left by another inmate. The discovery would change his life forever. “When I learned that God had a plan for me, that I was Saved and those animals weren’t, it all made sense.

“My favorite bits,” he adds, grinning, “are the ones where He kills sinners and sends them straight to Hell.”

His newfound faith fueled a burst of creativity. Leaving the bar circuit behind, he moved to Freehold, Iowa and began performing at the Landover Baptist Church, a fiercely pro-life, King James-only house of worship that welcomed him like a lost son. It was there that he met and married former stripper Rosalie-Ann Wagner. Although estranged from their three children, Roper and Rosie remain inseparable; he regards her as his muse, his best friend, and “the only member of that species worthy of my seed.” Landover Records has also blossomed thanks to his success. Once a humble hymn-and-sermon label run out of the church basement, it now boasts an array of artists from diverse genres, including fellow country crooner Billy Bob Jenkins, “life metal” band Golgotha, and blackface rappers Da Rychiss Brothaz. Crossburn and his wife Rosalie-Ann

Real Men Love Jesus breaks little new ground, but that’s just fine with Roper—and his audience. All his favorite themes are here, from immigration and race (“Heads on the Fence,” “Ape City”) to LGBT rights (“You Tell ‘Em, Kim,” “Queers Are the Disease, AIDS Is the Cure”), along with country-fried covers of classic church songs. Legally barred from singing about Obama since a court ruled that his 2010 opus Audacity of Rope contained terroristic threats, Crossburn has invented a new villain: gay Muslim dictator Barry Oogabooga, who rules America “with a limp wrist and an iron fist” from the watermelon-shaped Black House. The hero who rises up and finally defeats him? None other than Donald Trump.

“I wrote this one for the Don,” Crossburn says of his anthem “The Garbageman.” “We see eye-to-eye on a lot of issues. I believe he’s the one that’s gonna take out the trash. Fags, beaners, whores, junkies, leeches—they’re the reason we’ve got so many damn Democrats in office. These so-called people are lower than dirt. They belong in landfills, not in voting booths.” Although he has yet to receive a response, Crossburn has written to Trump and mailed several CDs to his campaign headquarters. He remains optimistic that the candidate will embrace his song.

“It chapped my hide when I heard him come out to that REM crap. The guy that sings that is a queer. It just ain’t right, what they do to each other’s asses, and I don’t need to be reminded of it whenever my man comes on the teevee. Queers are demons in human skin.”

Following the record’s release will be a multi-state tour, starting Christmas Eve at Freehold’s Paley Field and culminating with a headline gig at the Joyful Noise Music Festival in Biloxi, Mississippi in March. Live performance has always been the heart and soul of Roper’s act. “Once I tried some target practice with my .44 while I was playing. Ended up shooting my drummer’s ear off. The next time, I missed.” A new Crossburn release is always an exciting event, but this time, the thrill is bittersweet. The crooner has dedicated Real Men Love Jesus to a fallen friend.

“People think Geoff and I didn’t like each other,” he says of the late music critic Geoffrey Zales. “But they don’t know the whole story.” The two had a lengthy feud beginning in 2007, when Zales penned a scathing Pitchfork review of Roper’s latest LP, Appetite for Salvation. In response, Crossburn released a music video in which a Zales lookalike was sodomized by demons. A brawl at the 2011 Big Valley Jamboree left the Austin-based journalist with a spork in his eye and Crossburn behind bars. Despite being partially blinded, Zales maintained his acerbic wit, calling Crossburn “a sad manchild with a micropenis, if not a nanopenis.” The singer admits that his soul was troubled by the incident.

“I started drinking again when I got out of the joint. Much as it hurts to say, I stopped praying.”

Zales wasn’t done. He next attacked Roper’s character with the Vice magazine story “Holy Hush Money.” Dredging up a 1995 case, settled outside of court, in which two teenage girls accused Crossburn of raping them backstage, Zales alleged that the settlement sum was much greater than disclosed—and came straight from Landover’s coffers. The implication was that Crossburn was guilty, which he knew to be false. “Adultery is a sin, and the Bible says True Christians are incapable of sin. I never laid a finger on those little sluts.

“Or in them,” he adds with a sly chuckle.

Crossburn had a good case for a libel suit, but the last place he wanted to be was in another courtroom. He seemed trapped in a downward spiral—until, he says, a miracle happened. “One night I took too many pills for my back and passed out by the fire. When I woke up, I saw Jesus Christ standing over me. He said ‘Roper, you listen good, and you do what I tell you.’ So I listened. The next day, I called Geoff up and apologized. I told him I forgave him for what he’d done, and that I hoped he might forgive me too. Said I was praying hard that he’d find the Lord. Honest injun, I did cry. I had forgotten what the peace of God truly felt like. It wasn’t long after that… that he was gone.”

Zales was shot dead in February in what authorities described as a botched home invasion. Although the crime remains unsolved, Crossburn has promised to deliver “a knuckle sandwich” should he ever come face-to-face with the perpetrator. For now, he is focusing on his career, his family, and his faith.

“I am so thankful to God for blessing me with this talent. He put me on Earth to spread His Word through the music I make. If people get it, wonderful. If not, well, that’s okay too. One day I’ll be up in Heaven, singing songs with Jesus and laughing while my critics burn in Hell.”

That day may come. Until it does, Roper Crossburn is stuck down here with the rest of us—and he’s walking tall.