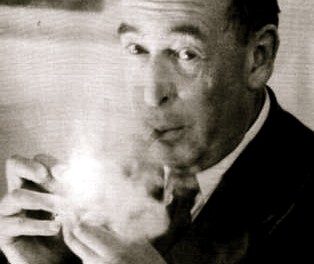 Many Christians treat CS Lewis’ words as canon. He is one of the best selling authors in history with over 2 million copies of his books moved off the shelves still yearly. Many so called evangelicals gobble his books up and even buy them for their adolescent children when they question Jesus.
He has been hailed as one of the greatest apologists of the modern era, but are his teachings really Christian?

Lewis believed in the man made idea of Purgatory that doesn’t appear in the Bible anywhere.

Our souls demand Purgatory, don’t they? Would it not break the heart if God said to us, ‘It is true, my son, that your breath smells and your rags drip with mud and slime, but we are charitable here and no one will upbraid you with these things, nor draw away from you. Enter into the joy’? Should we not reply, ‘With submission, sir, and if there is no objection, I’d rather be cleaned first.’ ‘It may hurt, you know’ – ‘Even so, sir.’
I assume that the process of purification will normally involve suffering. Partly from tradition; partly because most real good that has been done me in this life has involved it. But I don’t think the suffering is the purpose of the purgation. I can well believe that people neither much worse nor much better than I will suffer less than I or more. . . . The treatment given will be the one required, whether it hurts little or much.
My favourite image on this matter comes from the dentist’s chair. I hope that when the tooth of life is drawn and I am ‘coming round’,’ a voice will say, ‘Rinse your mouth out with this.’ This will be Purgatory. The rinsing may take longer than I can now imagine. The taste of this may be more fiery and astringent than my present sensibility could endure.~ Letters to Malcolm

Wrong, Mr. Lewis, our souls deserve hell! It is only our belief in Jesus that keeps us from hell. There is no in between place. If you weren’t currently being tortured by demons right now, I would ask you to show me a scriptural basis for purgatory.

Another heretical doctrine Lewis espoused was Catholic nonsense of transubstantiation.

That’s right, he believe that the crackers and grape juice literally become Jesus’ flesh and blood in the belly of a Catholic priest.

I find “substance” (in Aristotle’s sense), when stripped of its own accidents and endowed with the accidents of some other substance, an object I cannot think. My efforts to do so produces mere nursery-thinking.
..
On the other hand, I get on no better with those who tell me that the element are mere bread and mere wine, used symbolically to remind me of the death of Christ. They are, on the natural level, such a very odd symbol of that. But it would be profane to suppose that they are as arbitrary as they seem to me. I well believe there is in reality an appropriateness, even a necessity, in their selection. ~Letters to Malcolm Pg. 102

CS Lewis didn’t believe the entire Bible was literally the Word of God.

He believed it contains errors. I am not sure how someone can worship a god who is not powerful enough as to allow His instruction manual for salvation to have errors. But I give you Clyde Staple Lewis.

Naivety, error, contradiction, even (as in the cursing Psalms) wickedness are not removed. The total result is not ‘the Word of God’ in the sense that every passage, in itself, gives impeccable science or history. It carries the Word of God.~ Reflections on the Psalms Pg 94

“I have the deepest respect for Pagan myths, still more for myths in the Holy Scriptures” ~The Problem of Pain, P.71

“I have therefore no difficulty accepting, say, the view of those scholars who tell us that the account of Creation in Genesis is derived from earlier Semitic stories which were Pagan and mythical.” ~ Reflections On The Psalms, p.110 He even uses pagan/Satanic symbolism in the Narnia series.

CS Lewis didn’t believe that Jesus was the only way to heaven contradicting Jesus Christ in John 6:44

“There are people in other religions who are being led by God’s secret influence to concentrate on those parts of their religion which are in agreement with Christianity, and who thus belong to Christ without knowing it..
For example a Buddhist of good will may be led to concentrate more and more on the Buddhist teaching about mercy and to leave in the background (though he might still say he believed) the Buddhist teaching on certain points. Many of the good Pagans long before Christ’s birth may have been in this position” (Mere Christianity, pg. 176-177). In possibly the worse derivation from the Bible, CS Lewis also implied that souls could cross over from hell to heaven. God’s Word says the opposite. Luke 16:26 Watch as he shamelessly contradicts Jesus Christ.

But I notice that Our Lord, while stressing the terror of hell with sparing severity, usually emphasizes the idea not of duration but of finality. Consignment to the destroying fires is usually treated as the end of the story- not as the beginning of a new story. That the lost soul is eternally fixed in its diabolical attitude we cannot doubt; but whether this eternal fixity implies endless duration- or duration at all – we cannot say. ~ Letters to Malcolm Pg 122. I believe I have found the new definition of insanity. To controvert the words of Jesus, while claiming to be one of His followers.

In The Great Divorce, Lewis argues that everyone has a personalized hell that is merely the absence of God. He doesn’t believe in the Fiery Furnace that Jesus taught.

“And every state of mind, left to itself, every shutting up of the creature within the dungeon of its own mind–is, in the end, Hell”

We have come to the conclusion that C.S. Lewis was a wolf in sheep’s clothing and a heretic. So is every liar who quotes him or any Pharisee who owns his movies or books.
I sure wouldn’t want to be under his corrupting influence come judgement day.