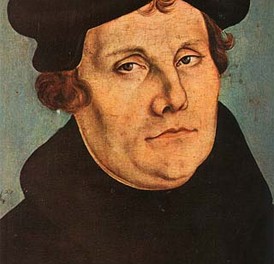 The historical fortunes of figures changes rather often based on the thinking of the day and depending on whether you worship Jesus or his mommy Mary. How the Catholics see Luther

For the Catholics, Luther is seen as the man who destroyed Christian hegemony. He is accused of being a murderer, a humanist. That his mother Margaret was a bathhouse attendant who fornicated with the devil.

For most of Renaissance, Industrial and modern eras Christians have seen Martin Luther as the reformer who finally won freedom from the Roman church’s thumb of oppression. The reluctant revolutionary who set off a movement that reached from all over Europe, North America, Australia, New Zealand, South Africa, India and so many other places all across the globe.

Even the movement Martin Luther started has been repudiating some of his teachings. Saying he was a sinner and in error. But why?

Is it because what he preached was heretical and varied from the scriptures we hold dear? Or is it that the Lutherans have moved away from the teachings of the Bible?

Let’s go over some of the major points of Luther’s theology and then we can decide whether or not we agree with him or not. But first a caveat.

The difficulty in studying Luther To even attempt to study Martin Luther is an incredibly daunting task. First off, Luther wrote close to 60,000 pages. He wrote throughout his entire lifetime, so many times something you will read will be a younger more idealistic Luther and others will be a hardened old man.

Then, there is that the Catholics have at least as many pages and made up quotes attempting to libel Luther. In this age of the internet, there are entire websites dedicated to twisting Luther’s quotes by using them out of context, quoting what his Catholic biographers said about him and attributing them to him.

Further exacerbating the situation, is that there are so called Christians repeating in a game of telephone these libelous Papist dogs’ misdirections. There are countless articles of Anabaptist/Pentecostal authorship eager to regurgitate these same so-called quotes.

And then the next group of axe grinders is the Jews. They have a special hatred for Luther as we will shortly see why. The Jews have been very eager to feed their “Stand with Israel” allies a steady diet of FUD with Luther as well.

And to even further confuse the issue, you have satirical atheist websites like jesus-is-savior.com propagating the same Catholic/ Anabaptist Libel. But the joke will be on them some day. Galatians 6:7

To even see whether Martin Luther said something or not takes very serious dedication and patience. I have done my best to fact check these quotes, but I am only a man, so I may not have everything 100% right. And if that’s the case, I apologize to God and my fellow Christians. The Catholics, Jews and Penetcostals can all go to hell where they belong.

On The Jews and Their Lies.

Luther later in life came to agree with the Catholics, the Apostle Paul and Jesus that attempting to convert the Jews was a waste of time.

Let their houses also be shattered and destroyed.  Let their prayer books and Talmuds be taken from them, and their whole Bible too; let their rabbis be forbidden, on pain of death, to teach henceforth any more. Let the streets and highways be closed against them. Let them be forbidden to practice usury, and let all their money, and all their treasures of silver and gold be taken from them and put away in safety. And if all this be not enough, let them be driven like mad dogs out of the land. The Catholic Church had the same policy against Jewry with the Inquisition. Some Popes allowed them while the others were in favor of expelling or forcibly converting them.

And Dr. Luther didn’t start off as being against the Jews. It was a natural extension of their obstinance that Jesus and Paul both pointed out.

1 Thessalonians: 2:14 For ye, brethren, became followers of the churches of God which in Judaea are in Christ Jesus: for ye also have suffered like things of your own countrymen, even as they have of the Jews:

15 Who both killed the Lord Jesus, and their own prophets, and have persecuted us; and they please not God, and are contrary to all men:

16 Forbidding us to speak to the Gentiles that they might be saved, to fill up their sins alway: for the wrath is come upon them to the uttermost.

Matthew 7:6 Give not that which is holy unto the dogs, neither cast ye your pearls before swine, lest they trample them under their feet, and turn again and rend you.

Luke 13:34 O Jerusalem, Jerusalem, which killest the prophets, and stonest them that are sent unto thee; how often would I have gathered thy children together, as a hen doth gather her brood under her wings, and ye would not!

35 Behold, your house is left unto you desolate: and verily I say unto you, Ye shall not see me, until the time come when ye shall say, Blessed is he that cometh in the name of the Lord.

John the Divine calls them “The Synagogue of Satan”

Many Pastors contend the meaning of the phrase, but a reading of Romans 2 makes it a very plain prooftext.

28 For he is not a Jew, which is one outwardly; neither is that circumcision, which is outward in the flesh:

29 But he is a Jew, which is one inwardly; and circumcision is that of the heart, in the spirit, and not in the letter; whose praise is not of men, but of God.

Luther naively believed the Jews would convert to Christianity if Christians were just nice to them. Later in his life, he learned the same truths about them that everyone else had. This is 100% in line with our beliefs. The remnant of the so called Jews should be perfected. See also Romans 11:4-5

Luther hated the Anabaptists and wished them exterminated. The Anabaptists were a sect of “Christians” that have a few beliefs in common with a independent or primitive Baptist church like this one. The Anabaptists are the precursors to the Amish, Mennonites, Hutterites, the Shakers and the Quakers. They believed that everyone should stand up and speak in church loudly and boisterously. They even allowed women to speak contra to Paul’s commands in 2 Tim 2:12 and 1 Cor 14:34.  I believe they are the spiritual equivalent of modern Pentecostals, whose deprivations we have documented already.  In our church you will not find unscheduled speakers. We believe church should be an orderly event led by ministers ordained by God to tend to Jesus’ sheep.

Anabaptists were also staunch pacifists, who would have laid down and allowed the Mohammedans to conquer Christendom. Luther realized the need for strong leadership to fight the constant menace to God’s people and the need to stop such dangerous thinking before it begins.

Perhaps the Anabaptists were in league with Satan and the Turks, because they also believed that Christ was merely a human man.

Martin Luther was a staunch believer in secular punishment for the crimes of:

If some were to teach doctrines contradicting an article of faith clearly grounded in Scripture and believed throughout the world by all Christendom, such as the articles we teach children in the Creed — for example, if anyone were to teach that Christ is not God, but a mere man and like other prophets, as the Turks and the Anabaptists hold — such teachers should not be tolerated, but punished as blasphemer. By this procedure no one is compelled to believe, for he can still believe what he will; but he is forbidden to teach and to blaspheme.

For they are not mere heretics but open blasphemers; and rulers are in duty bound to punish blasphemers as they punish those who curse, swear, revile, abuse, defame, and slander. With their blasphemy such teachers defame the name of God and rob their neighbor of his honor in the eyes of the world. In like manner, the rulers should also punish—or certainly not tolerate—those who teach that Christ did not die for our sins, but that everyone shall make his own satisfaction for them. For that, too, is blasphemy against the Gospel and against the article we pray in the Creed: “I believe in the forgiveness of sins” and “in Jesus Christ, dead and risen.” Those should be treated in the same way who teach that the resurrection of the dead and the life everlasting are nothing, that there is no hell, and like things, as did the Sadducees and the Epicureans, of whom many are now arising among the great wiseacres. We concur. Blasphemy cursing, swearing should be punished. Speaking a view differently from that of God’s as spoken about in the Bible is blasphemy. As we are 100% ground in Scripture, we should rightly be the ones that interpret what is blasphemy and false teaching, much like Luther did.

For Rebellion against God’s Ordained Authorities

Peasants are no better than straw. They will not hear the word and they are without sense; therefore they must be compelled to hear the crack of the whip and the whiz of bullets and it is only what they deserve. If they say that I am very hard and merciless, mercy be damned. Let whoever can stab, strangle, and kill them like mad dogs.

Like the drivers of donkeys, who have to belabor the donkeys incessantly with rods and whips, or they will not obey, so must the ruler do with the people; they must drive, beat throttle, hang, burn, behead and torture, so as to make themselves feared and to keep the people in check.

We conditionally agree with this statement much like Luther must have. Because Paul agreed with this statement in Romans 13:1-6. Surely this is an older Luther writing these words. For him being the rebel must have been long over. He had fought his battle with the Catholic Church and won. He was surely  living under a Lutheran prince who upheld God’s Word by this time.

But if Luther had been living under, say a Catholic ruler, I know Acts 5:29 would have applied. In much the same way as today if there is a Godly ruler in power or a heathen.

I may at some time do a followup to this article as we are pushing 2,000 words of time consuming research and I have barely scratched the surface of commonalities in our beliefs.

Martin Luther has often been vilified, but upon further historical reflection, could Martin Luther be on the right hand of Jesus?