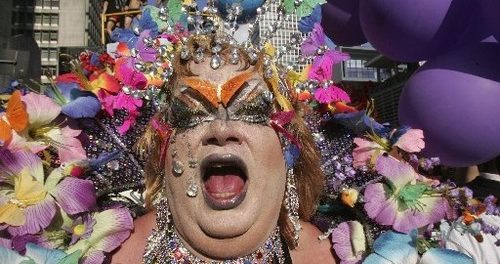 The face of big sodomy

As many of you know, we are losing a great advocate for morality and God with the sad news that Oklahoma State Representative Sally Kern will not be returning to office when her term is complete.

Mrs Kern did what she could to protect the state of Oklahoma from the looming horror of buggery. She introduced House Bill 1597 to protect God fearing shop owners from being forced to service sodomites, House Bill 1598 to allow parents to deprogram their anally brainwashed children, and House Bill 1599 to keep tax money out of the semen & exfoliating cream stained hands of the homosexuals.

She was an outspoken advocate for public decency, insisting that Big Gay was a bigger threat to our nation than terrorism. The face of big sodomy

The Gay Agenda is five hundred times worse than terrorism!

Gays destroy small business: By forcing their well-dressed selves into shops, the deviants force Godly Mom & Pop businesses to close their doors or suffer the consequences of frivolous lawsuits when they refuse to bake pornographic, semen iced ‘wedding cakes’ and roofie cookies that these homosexual predators give to young boys in order to abduct, sodomize, and convert them. Gays hate the economy. What sodomy did to Detroit. We assume this fellow is gay.

Gays spread disease: Gays are the primary carriers of Aids. They spread the Aids and other communicable diseases through sodomy, toilet seats and the practice of shared drug needles. Gays hate health.

Gay marriage hurts middle class women: By not marrying a woman slightly less affluent than themselves, the gays cause these women to spiral into poverty as the greater income of a male provider is denied them. Gays hate the middle class. Gays cause skyrocketing taxes: By forcing their ungodly agenda, gays force state and federal lawmakers to spend countless time and money revamping state and federal laws. Billions in tax money is required to make legal accommodations for a collection of boy-hungry mincing pedophiles who at most represent 5% of the voting public. Gays hate frugal taxation.

Gays want to shove a big, throbbing gag in our mouths: By having lawmakers declare anti-sodomy sentiment ‘hate speech’ gays deny us our freedom of speech. Gays hate the Constitution. Gays jeopardize national security: It is an established medical fact that gay butt sex causes muscular atrophy which is greatly pronounced in the wrists. In addition to causing the floppy wrist gay marker, this prevents gays from being effective combat soldiers as they are unable to hold rifles or throw grenades. Furthermore, their notion of camouflage consists of floral prints. Finally, their propensity for sodomasochistic acts anywhere at any time leaves gay troops vulnerable to sneak attacks. Gays have been known to drop their weapons and present their backsides when faced with combat. Gays hate national security. A sissy attempting to do sports.

Gays invoke God’s Wrath: 2 Peter 2:4-6 For if God spared not the angels that sinned, but cast them down to hell, and delivered them into chains of darkness, to be reserved unto judgment; And spared not the old world, but saved Noah the eighth person, a preacher of righteousness, bringing in the flood upon the world of the ungodly; And turning the cities of Sodom and Gomorrha into ashes condemned them with an overthrow, making them an example unto those that after should live ungodly;

In summation, the Gay Agenda is a multi-pronged attack on the morality, economy, and social coherence of America. The Gay Agenda seeks nothing less than to make you homeless and force you to watch as they sacrifice the fetuses of impoverished unwed mothers to Satan and sodomize your son in a public bathroom to the beat of the gay discotheque next door.

Gays are to terrorists as nuclear weapons are to pea shooters. There really is no comparison.