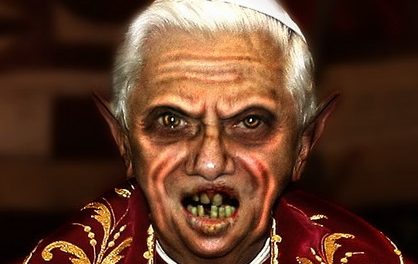 It took me a long time to figure it out, but here it is: Catholics are so far away from the Bible that they don’t even follow the same Ten Commandments! I’ve searched the forum and I haven’t found a thread about this Catholic fallacy, so here it goes.

This is the Biblical list of the Ten Commandments (see e.g. this thread):

Now look at this list copied from an ungodly Catholic website:
I’ve highlighted the differences. As you can see, the Catholics:

a) removed the Second Commandment (in purple),
b) in order to make up for this omission, they divided the Tenth Commandment (in green), and
c) changed the numbering of everything in between.

This division is totally nonsensical, given that the removed Second Commandment takes a whole verse (Exodus 20:4, Deuteronomy 5:8), while the artificially divided the Tenth Commandment verse goes as follows:

The “wife” is squeezed between the “house” and the “manservant,” there is no way that she can be taken away and separated into a whole another commandment!

Although in Deuteronomy 5:21 the “wife” is listed before the “house,” it still is not a reason to divide a single verse into two different commandments.

I did a quick search of this blasphemous difference on the internet and it looks like it is St. Augustine’s fault. Apparently, Lutherans follow the same false version as Catholics.

I guess that explains all of the miraculous images of Mary etc – they simply wiped out the part of the Ten Commandments about making images!