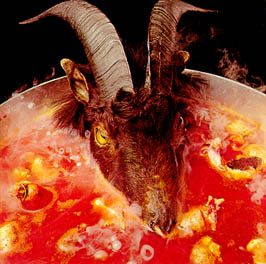 Hello brothers and sisters of Christ, I know that this is a topic much discussed already, but it cannot be said enough. Rock music is a scourge on our nation, and must be stopped at all costs. Here are 10 facts that explain exactly why God hates this rubbish “music”.

1. It encourages the use of illegal drugs. Practially every one of the top 40 records being played on every radio station in the United States is a communication to the children to take a trip, to cop out, to groove. The psychedelic jackets on the record albums have their own hidden symbols and messages as well as the lyrics to all the top rock songs and they all sing the same refrain: It’s fun to take a trip, put acid in your veins.

2. Drums are the instruments of satanists, devil worshipers and pagans, and should never be listened to. The rhythm has been proven to have a brainwashing effect on children, and slowly converts them to satanism. If you hear drums, block your ears! I cannot stress this enough.

3. Rock music encourages rebellion. The Lord orders us to submit to unto him, but with this rock and roll in our ears, we are likely to rebel against Him and His word. Further, the music teaches children not to listen to the wise counsel of their parents. How can we raise our children to be good Christian Americans when they listen to this rebellious filth?

4. Rock music encourages homosexuality and transvestism with men wearing make-up, and even dresses or skirts (which they try and say are “kilts”, ha! We know better than to fall for that! Clearly rock represents a homosexual agenda, with all male groups touring the countryside in one bus. Most likely they are sharing the same bed as well, but let’s not get into that.

5. Rock encourages women to start thinking for themselves, and to believe that they don’t need a husband to guide and lead them. So-called female rockers parade on stage singing about nonsense like “independence”. All such performers are lesbians or possibly bisexual, as some travel alone with large groups of men.

6. So-called “Christian” rock groups are the worst of all. Not only do they put the name of our almighty God into these “songs” with drums and guitars, which is the height of blasphemy might I add, but they’re also part of the same agenda as the rest of them. They attempt to fool good Christian children and parents into buying their music in order to brainwash them and convert them to satanism.

7. Rock tries to tell us that the government is wrong, but only when a Republican is in office. Look how they’ve stopped doing that since Comrade Obama muscled his way into office. They’ve always wanted to destroy our beautiful capitalist country with their socialist ideals. Remember, it’s a small step from rock music to communism.

8. Rock music encourages promiscuity and whoredom with their overly sexual lyrics and innuendo. They parade around on stage and in videos half-naked in an attempt to convince young girls (and boys) that they want to have sex with them. Studies have shown that children and teenagers who listen to rock are 22% more likely to have sex with older persons. Rock music = pedophilia.

9. Rock concerts are often used to present propaganda about “peace”. This is a clear distraction from the war that God has ordained us to win. If the rock musicians were in charge, we’d all be living under the rule of the Saudis by now!

10. Lastly, rock music encourages us not to read God’s Holy Bible. The lyrics of nearly all rock songs are laced with subliminal messages telling us to burn our Bibles and submit to the will of Satan! We must ensure our children read the Bible instead of listening to this filth.

So there you have it, ten indisputable facts that prove that God hates rock music. We need to stand strong against this onslaught my friends, if your children bring home a rock CD, make them break it in half. Tell them to listen to real American music like Dolly Parton or Willie Nelson. Or even better, why don’t we listen to more hymns? Encourage family singalongs of “Onward Christian Soldiers” and other real Christian patriotic songs.