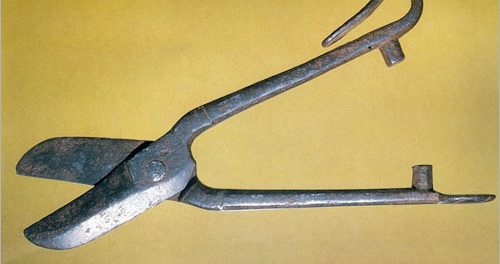 Mark 9:43:
And if thy hand offend thee, cut it off: it is better for thee to enter into life maimed, than having two hands to go into hell, into the fire that never shall be quenched:

I have a good friend, a retired butcher from my village and he’s willing to perform the surgery next weekend. I know my son won’t be able to bring me any grandchildren but I’ll just leave that up to my other sons instead. However, I’m not entirely sure whether this is the right thing to do but I think this might be the only way to save my boy from burning in hell for eternity.

What are your thoughts on this? Is anybody familiar with this solution? If so, did it work?

Copyright © 1620, 2023 landoverbaptist.net, all rights reserved. The information presented here is Biblically accurate. Opinions concerning the technical difficulties, fitness requirements, safety, and ratings of self-crucifixion, flagellation, stoning, destroying enemies of GOD utterly, without mercy, and other activities inherent in Christianity are subjective and may differ from yours or others' opinions; therefore be warned that you must exercise your own judgment as to the difficulty and your ability to safely protect yourself from the inherent risks and dangers. Do not use the information provided on this site unless you are a True Christian â„¢ who understands and accepts the risks of participating in these activities. Landover Baptist Church makes reasonable efforts to include accurate and up to date information on this website, errors or omissions sometimes occur, therefore the information contained on here is provided "as is" and without warranties of any kind either expressed or implied. Viewing, reading, or any other use of the information contained within this web site is purely the voluntary will of the viewer or user. You, 'the viewer' or 'user' shall not hold the publisher, owner, authors or other contributors of The Jesus Experience responsible for any incidents related directly or indirectly to the Experience. Landover Baptist Church, et. al., assumes no liability or responsibility for your actions.