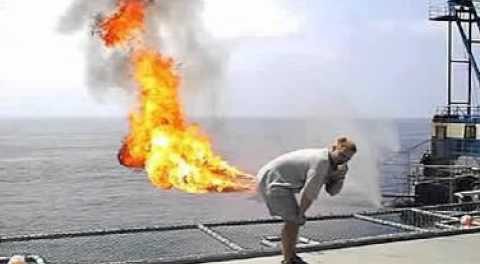 “Tell these faggots, either they get outta town or flame and fire gonna come outta their butthole. And anybody that sympathizes with ’em, they gonna have a flame shooting outta their vagina.”

Pastor James Manning has a word of prophecy for the gays. As a Godly man of wisdom, it is sure to come true.

Some weak and watered down Christians may be shocked by this prophecy. They may shake their heads and call the only Godly man left in New York City things like a “bigot” or a “hate preacher.” But is Pastor Manning’s message really that controversial? The short answer here is no. If Pastor Manning is a bigot or hateful, so is the author of over half of the New Testament, our beloved Apostle Paul.

26 For this cause God gave them up unto vile affections: for even their women did change the natural use into that which is against nature:

27 And likewise also the men, leaving the natural use of the woman, burned in their lust one toward another; men with men working that which is unseemly, and receiving in themselves that recompence of their error which was meet.

28 And even as they did not like to retain God in their knowledge, God gave them over to a reprobate mind, to do those things which are not convenient;

Jesus’ favorite Apostle (in the short period between the death and the return, but before the final return) says quite clearly that those people deserve death. And not just those who do it, but those who support them as well.

32 Who knowing the judgment of God, that they which commit such things are worthy of death, not only do the same, but have pleasure in them that do them.

The world today may try to tell you this is a perfectly natural thing and that it’s okay. They may even get tawdry giggles about the idea of God sending a plague on the gays that will make flames shoot out of their butt holes. But I can assure you it’s no laughing matter. “Chair manufacturers will have to make chairs where people can sit standing up because of all the flames coming out of the gays’ butt holes.” I suppose they’ll all have to lay down standing up too? Is there any way we can make money off of this coming Godly judgment? Can we invent or invest in a chair you can stand it?

“He’s got to wear asbestos diapers.” I know know asbestos is a carcinogen. Much like gays, I don’t want to be around it. Personally, I would like to limit such an item to being sold at Target or some other gay store, like maybe Starbucks.

The biggest fear I have: I think of ass cancer and flames shooting from butt holes as the final thing that happens before Satan takes their souls for eternal torture, but Pastor Manning makes this look worse than a silly (except Matthew 27:52-53) zombie apocalypse. How long do these flame shooting butt hole queers live for? Apparently long enough to need a chair you can stand in and asbestos diapers. What is to stop them from banding together to form Satan’s army? There could be scores of bombardier queers running around shooting people with weapons grade AIDS infested, cancer giving butt flames! They could even be a bigger threat to our American way of life than they are now!

I know these things must come to pass if a Godly Pastor like James Manning says they will, but I am  praying for God to give me the strength to endure such hardships.

Pastor Manning wants us to go forth and preach this message against sodomy. “I want you to preach it against the sodomite maker Barack Hussein Obama, the son of Satan.”

He wants us all to become sodomite slayers, like David James Manning and the Apostle Paul are? Won’t you join us in answering the call to preach against the sodomy?