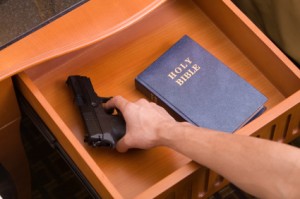 News of the arrest of the so-called “Claremont serial killer” is making headlines Down Under. But have police, with their secular forensic science and DNA technology, caught the right man? Let’s put on our True Christian™ detective caps and do some Biblical sleuthing.

The Facts
Between January 1996 and March 1997, three women – Sarah Spiers, 18, Jane Rimmer, 23, and Ciara Glennon, 27 – were abducted from the seedy streets of Claremont after a night of clubbing. The resulting police investigation into their deaths is the largest and most expensive enquiry ever conducted in Australia.

True Christian™ Crime Scene Investigation
As Spiers was never found, we need not concern ourselves with treating her disappearance as a murder. However, Rimmer and Glennon’s bodies were later found in bushland. To solve these crimes, we must turn to Deuteronomy 21.

Deut 21:1-3a
1 If one be found slain in the land which the Lord thy God giveth thee to possess it, lying in the field, and it be not known who hath slain him:
2 Then thy elders and thy judges shall come forth, and they shall measure unto the cities which are round about him that is slain
3 And it shall be, that the city which is next unto the slain man . . .

So according to God’s Word, what should we do when a body is found?

Seal off the area to prevent contamination? No.
Identify the victim? No.
Determine cause and time of death? No.
Determine whether there may be a connection with other deaths or disappearances? No.

We should measure the distance to the nearest city. So let’s do that now, using modern technology as an aid to following Biblical procedure rather than as a replacement of it. (By the way, I have done my best to convert metric measurements into American.) 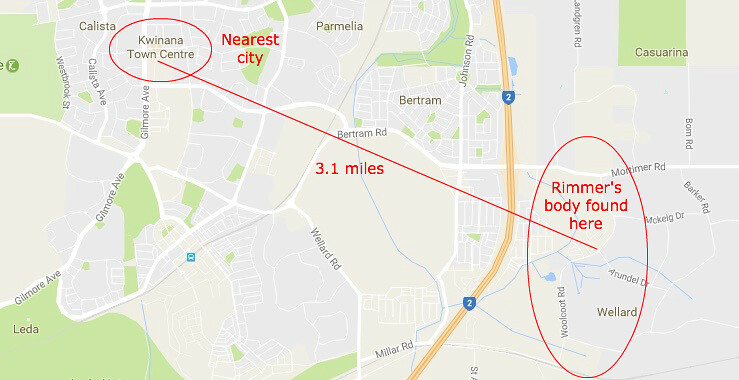 As we can see, Kwinana is the city nearest to where Rimmer’s body was found. Let’s do the same for the second victim. 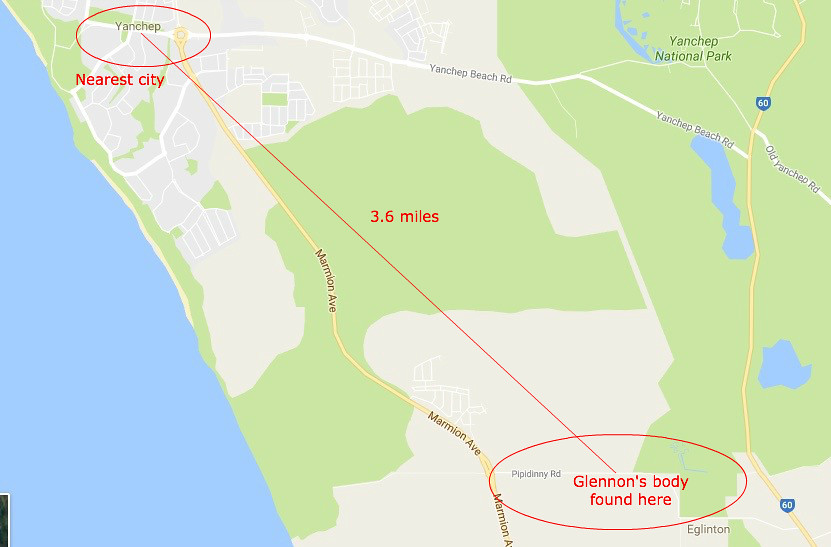 Here we see that Yanchep is the closest city.

But is this what investigators did? No.

Where the Secular Investigation Went Wrong
The Macro Task-Force that was set up initially focussed its investigation on the city where the young women were last seen rather than on the cities nearest to where the bodies were found. Among the early suspects were the then Mayor of Claremont and a Claremont public servant. The most recent suspect, Bradley Robert Edwards, 48, who was arrested on Thursday 22nd December and charged with the murders of Jane Rimmer and Ciara Glennon, is a resident of the City of Belmont. If we look at a map, we can put all this into perspective. 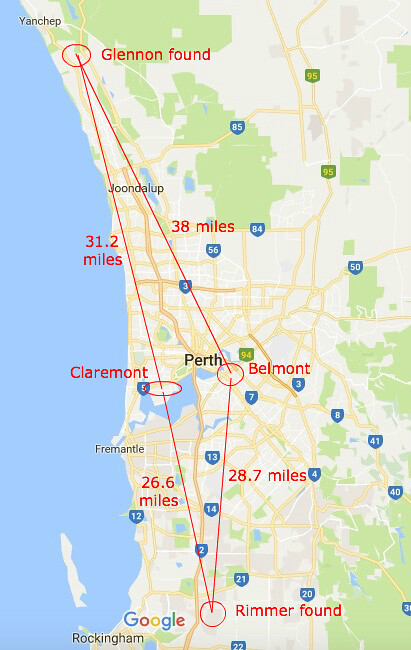 A True Christian™ Denouement
So what should happen now that we have established which cities were closest to where the bodies were found? To find that out, we need to return to Deuteronomy 21.

Deuteronomy 21:3-9
3 And it shall be, that the city which is next unto the slain man, even the elders of that city shall take an heifer, which hath not been wrought with, and which hath not drawn in the yoke;
4 And the elders of that city shall bring down the heifer unto a rough valley, which is neither eared nor sown, and shall strike off the heifer’s neck there in the valley:
5 And the priests the sons of Levi shall come near; for them the Lord thy God hath chosen to minister unto him, and to bless in the name of the Lord; and by their word shall every controversy and every stroke be tried:
6 And all the elders of that city, that are next unto the slain man, shall wash their hands over the heifer that is beheaded in the valley:
7 And they shall answer and say, Our hands have not shed this blood, neither have our eyes seen it.
8 Be merciful, O Lord, unto thy people Israel, whom thou hast redeemed, and lay not innocent blood unto thy people of Israel’s charge. And the blood shall be forgiven them.
9 So shalt thou put away the guilt of innocent blood from among you, when thou shalt do that which is right in the sight of the Lord.

While the Old Testament sacrificial system no longer applies, we can still apply the general principles of this passage. Investigators ought to seek the mediation of a pastor, elder, deacon or other wise True Christian™ man (v 5) – not easy to find in that part of the world. The councillors of the cities of Kwinana and Yanchep then ought to be made to swear that they had no part in the murders and no knowledge of who committed them (v 7-8a). Case closed. God would be satisfied with that (v 8b-9).

But since that’s not what happened, guilt for the murders still lies with the cities of Kwinana and Yanchep, not with the man who has just been arrested – unless witnesses against him can be found (Deut 17:6).

When Can I Expect my Reward?
I believe there is a $250,000 reward for any information that would help solve this case. Does anyone know how I can make a claim?