My atheist friends time taunt me with childish question like “show me any proof, no matter how vague of this existence of God.” While this is utterly disingenuous, proof of God’s existence is in all of our hearts as atheists well know, I suppose for the weak faith it is worth the effort of putting up a good example. So for my friends how there who persist in denying the existence of God here goes.

The cucumber: The cucumber sleek shape is the correct size of the human hand. While one can make the weak argument that cucumbers are just that size because apes eat them and Godly micro evolution caused this them to be convenient to a human sized hand no other primate we are supposedly related to eats the cucumber, only humans. This also makes the cucumber the optimal size to be inserted into a human bodily orifice, again there is no natural reason for this. Only humans are depraved enough to violate themselves with a vegetable. Cucumbers have a tough out skin that allows them to put up to resist repeated rubbing, like what will happen when a cucumber is inserted into a human bodily orifice for purulent reasons. Again, no natural reason for this. 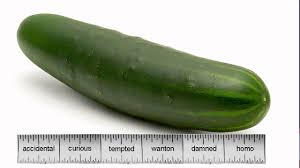 Who or what is so obsessed with what humans put into their bodies that it would create a vegetable to enable it? There is only one answer; the God of the Christian Bible. Sticking things into your bum is a major point of Christianity. It is the direst of sins and God is on the constant alert for it, He is utterly outraged by it and tests humanity for it relentlessly. Clearly cucumbers are created by God as a trap for any hidden self sodomites out there.