It has always deeply bothered me to see good men and women led astray – why anyone should want to be Catholic or take a pride in being Catholic defeats me.

To any right-thinking person, the objections come under 4 headings:

Doctrine
Transubstantiation The doctrine is simply wrong. How can a piece of bread or a glass of wine turn into human flesh and blood? It’s never going to happen, and anyone who’s eaten or drunk the stuff will tell you that it doesn’t change! If the Catlix get you believing that one – they can make you believe anything.

The idea that an intercessor is necessary between man and God. This is simply stupid! God wants to hear from you no matter where you are or what you are doing. Nowhere in the Bible does God say “Don’t call me directly – leave a message with Jesus’s mom, but do it through a man in a strange dress at the local franchise.” All priestly intercession does is allow your personal secrets to be known by a priest – what has it to do with him?

Purgatory – what’s that all about? Where does purgatory exist in the Bible? Or did someone make it up so they could offer forgiveness in exchange for a bit of gold? Seems likely doesn’t it?

And what are all these statues, or as God says “Graven Images” of Mary doing standing about the place? Why are they necessary to Salvation? How many gods and goddesses do the Catlix want?
Ever read the verse where Jesus speaks to his mother? (Well, if you are a Catholic, you will not have done as you have never read the Bible – the priest will have told you the bits that fits with the vicar of Rome’s corporate message.) John 2:4
3 And when they wanted wine, the mother of Jesus saith unto him, They have no wine.
4 Jesus saith unto her, Woman, what have I to do with thee? mine hour is not yet come.
5 His mother saith unto the servants, Whatsoever he saith unto you, do it.

The Pomp and Ceremony
So there was the prophets and patriarchs and Jesus and the Disciples, in the Bible, wandering around in basic woollen robes and open-toed sandals… look at the hierarchy of the Whore of Babylon and then recall
M’t:23:2: Saying, The scribes and the Pharisees sit in Moses’ seat:
M’t:23:5: But all their works they do for to be seen of men: they make broad their phylacteries, and enlarge the borders of their garments,
M’t:23:6: And love the uppermost rooms at feasts, and the chief seats in the synagogues,
M’t:23:7: And greetings in the markets, and to be called of men, Rabbi, Rabbi.

Have you seen a Catlick bishop’s robes in a church – like Pharisees aren’t they? Then gold, the incense, the huge ornate buildings, the land, the investments, the money trading, their cars and houses… and these are supposed to be Christian? 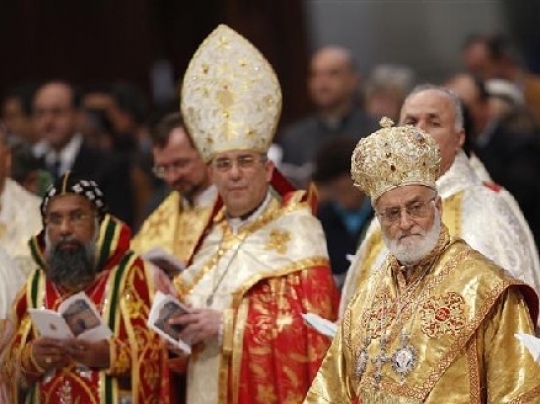 History
Wars, slavery, oppression, the theft of lands and treasure, the merciless lust after earthly wealth and power was there from the start and lasted until about 700 AD when kiddy fiddling and generalized abuse was officially added to the list.

Today it is open season – anything goes. And the Church operates like the Freemasons – a secret society looking after its own. And what is more, the Church uses the same excuse time after time… “Yes, we are very sorry about all that, we are not like that now.” And then it back to the same game.

To my amazement, despite all this, people still go to Catlick churches… why? It must be like a whole cult who believes that stroking Polar Bears gets you to heaven – “Yes, some of us get mauled, maimed and killed, but that’s the way it is – you have to stroke Polar Bears… Yes I know there are other cults but I still want to stroke Polar Bears.”

Organization
Just look at it. It is monstrous – it is like an army from the cadets (choirboys) foot soldiers (priests) Bishops and Archbishops (commissioned officers) right up to the Pope – the Pentagon. But this is where it differs: the Pentagon is under the command of the Government which there with the consent of the people – How many popes does the average Catholic get to vote for?

So how did they get here?
At some time in the past, America allowed these creatures in to scout out the land and gather fellow-travelers. By pouring in some of their corruptly obtained gold, they were able to establish secret cells from which the toads could creep out and infect more good Americans with their evil ideas. Worse, in the manner of the sections of an evil army, there is an intelligence section – the Jesuits, the most heavily funded division of the Anti-Christ, who are masters of Fake News and propaganda. They combine the reasonableness of the Waffen SS with all the skill and knowledge of the KGB Intel Section – they keep the population in line – and don’t forget – you make confession and they have all the goods on you they’ll ever need. 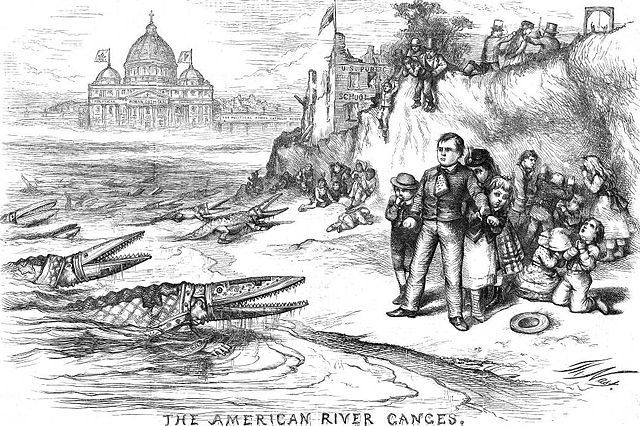 Do you know a Catholic? Show him this article. And then see him squirm and tell lies like a demon about to be exorcized.