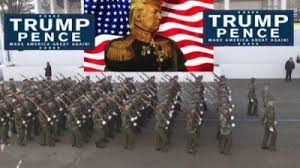 What has bugged the President for some time is that the President of North Korea gets to host a huge military parade and we don’t have them here. That is going to change.

The President has ordered the Pentagon to began preparations for such a parade. My guess is our President will stand on a podium much like President Kim and have his picture taken many times. It will be a wonderful moment for our country.