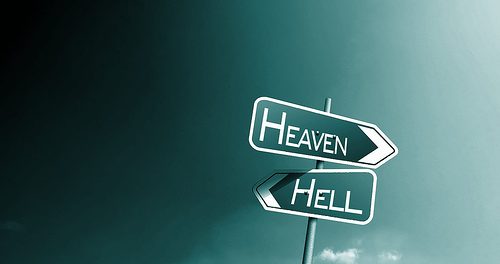 This is an introduction to the TOP 7 ways to go to HELL and most importantly: how to avoid them!

Why do you go to hell: Disney is the ultimate evil. Why? Because it is smartly dressed up as innocent entertainment for innocent children while in reality it is run by Satan himself! It teaches our children about sex before marriage and dressing like sluts. Or, in case of Donald Duck, even to just run around naked! Not convinced yet? Did you know Steve Jobs is on the board of directors of Disney!

How to avoid: To protect your children from the ultimate evil that is Disney destroy your television set. Destroy all Disney related toys (to be on the safe side just destroy all toys) and introduce your children to the only reliably form of entertainment: studying the KJV1611 Holy Bible!

Matthew 24:24 “For there shall arise false Christs, and false prophets, and shall shew great signs and wonders; insomuch that, if it were possible, they shall deceive the very elect.”

#6 Lying on the Internet

Why do you go to hell: Internet makes it too easy to lie. No one can see you. No one really knows you. Being completely anonymous makes it very easy to lie. So a lot of people do. They assume fake names. They even use fake pictures! Idiot losers suddenly become online superheroes. But it doesn’t work that way! Lying is not just a sin, God really hates liars! Almost everyone on the Internet will end up in hell!

How to avoid: Destroy your computer. Smash your smart phone. Crush your pad. You should spend your time studying the KJV1611 Holy Bible instead. And for contact with other people there is Baptist Church!

Proverbs 6:16-19 “These six things doth the LORD hate: yea, seven are an abomination unto him: A proud look, a lying tongue, and hands that shed innocent blood, An heart that deviseth wicked imaginations, feet that be swift in running to mischief, A false witness that speaketh lies, and he that soweth discord among brethren.”

Why do you go to hell: Iceland is where sinning was invented. Iceland is actually build on top of Hell! They use the fires of Hell to heat their Igloos! Their prime minister is gay, and to make matters even worse, a woman! They have an entire museum explicitly promoting sex before marriage! It is a known fact that 99.9997% of the population of Iceland will end up in the fires of Hell!

How to avoid: Never ever go to Iceland! And if you happen to live there? I am sorry, it is too late for you. We already saved everyone who could be saved.

Psalm 9:17 “The wicked shall be turned into hell, and all the nations that forget God.”

Why do you go to hell: Woman dress like sluts for one reason only. To seduce men into having sex with them. And often once they succeed and realize how stupid they have been they suddenly call it rape!

1 Timothy 2:9-10 “In like manner also, that women adorn themselves in modest apparel, with shamefacedness and sobriety; not with broided hair, or gold, or pearls, or costly array”

Why do you go to hell: God does not like gays! He does not just hate them, he wants us to kill them!

How to avoid: Stop being gay! Prevent your children from becoming gay!

Romans 1:26-27 “For this cause God gave them up unto vile affections: for even their women did change the natural use into that which is against nature: And likewise also the men, leaving the natural use of the woman, burned in their lust one toward another; men with men working that which is unseemly, and receiving in themselves that recompence of their error which was meet.”

Why do you go to hell: God created animals for us to have total dominion over. Vegetables are never mentioned in that context. If we do not eat animals we insult God by ignoring his specific instructions! Vegetables are for gays and we have already establishing they go to Hell!

How to avoid: Kill animals and eat them!

Genesis 1:27-28 “So God created man in his own image, in the image of God created he him; male and female created he them. And God blessed them, and God said unto them, Be fruitful, and multiply, and replenish the earth, and subdue it: and have dominion over the fish of the sea,and over the fowl of the air, and over every living thing that moveth upon the earth“

Mark 9:47 “And if thine eye offend thee, pluck it out: it is better for thee to enter into the kingdom of God with one eye, than having two eyes to be cast into hell fire“.

Mark 9:43 “And if thy hand offend thee, cut it off: it is better for thee to enter into life maimed, than having two hands to go into hell, into the fire that never shall be quenched“.