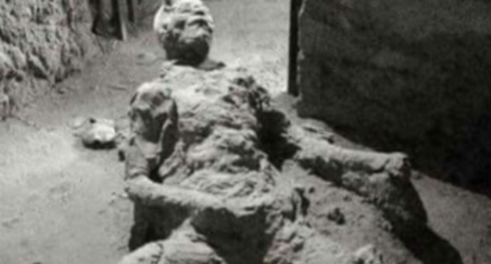 One of the most tremendous eruptions ever, the Vesuvius incident in 79 AD! Carefully documented by a pagan historian, Pliny the younger. Ignorant geologists and evolutionists, not to mention cosmologists, have claimed that this eruption was caused by a magma chamber, molten rock deep inside the Earth’s innermost core. Their opinion has ruled supreme and the much more simple and plausible True Christian™ explanation – God’s Wrath (e.g., Exodus 15:7) – has been all but forgotten by the sodomizingmasses. Recently, new powerful evidence emerged. Instead of a magma chamber, there was a bedchamber filled with lust and animalistic sounds of self-abuse and auto-erotic breeding. A corpse of the 79 AD eruption was discovered. 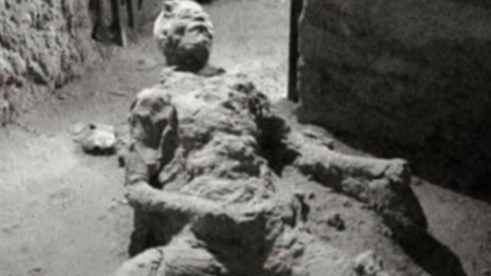 This pagan believer of the Jupiter cult knew that death was imminent. He saw the pyroclastic flows emerge from the top of the volcano. Instead of finally turning to Jesus and accepting the Gospel, he decided to continue fondling his own genitals until he was buried under molten lava and ash while still holding the organ of his condemnation. A simple act of repentance (Matthew 9:13) would have been enough. Instead, the cleansing volcanic eruption was opposed by the orgiastic eruption of this man’s semen.

How do we know that it was God who orchestrated this preview of Hell approved to all Antique audiences?

Psalms 11:6
Upon the wicked he shall rain snares, fire and brimstone, and an horrible tempest: this shall be the portion of their cup.

God is in charge of eruptions. If someone tries to usurp His power by controlling his own emissions, God will intervene. He did intervene. Pompeii is no more. The man in the picture, remains. In Hell.