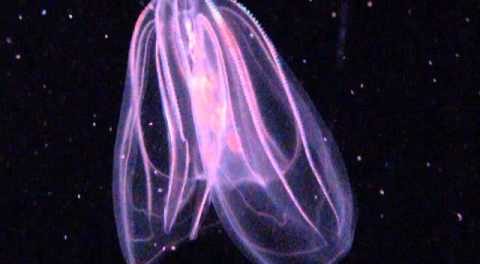 Secular science has discovered another Miracle by God: An animal that produces anuses in various parts of its body at will. While well-researched from the atheist viewpoint, this piece of information is nice but not thrilling. However, when examined through the unbiased lens of Creation Science, this becomes a Nobel-prize worthy discovery.

We have a “primitive” animal, a “warty comb jelly” of the Created Comb Jelly (Ctenophora) kind. It has no anus in its regular state. Only when it has eaten and consumed enough of God’s Goodies, the gut closest to its surface produces an anus to get rid of the waste. Glory! Quote:

This is staggering news. A permanent anus is unnecessary. In fact, if we examine the Bible, the first references to defecation, that is, requirements for anuses, only arise in Deuteronomy followed by further references to its burning in Exodus and to the consumption of dung in Ezekiel, etc.

Deuteronomy 23:13
And thou shalt have a paddle upon thy weapon; and it shall be, when thou wilt ease thyself abroad, thou shalt dig therewith, and shalt turn back and cover that which cometh from thee:

Was there dung before the Fall (Genesis 3:6)? Presumably not, as things were nice and clean. This also explains any problems with the second law of thermodynamics, that the secularists say was always the same, as Adam and Eve would have perished if unable to break down nutrients. Now we know that anuses are an afterthought, the food in Paradise was so good that no unnecessary fiber of microbial mass accumulated and had to eliminated.

The default state of man is a clean rear without an anus. This comb jelly is probably a remnant of the conditions that prevailed without sin. With the Fall (Genesis 3:6), the need to defecate arose. The sinning mankind seized the opportunity to mock Jesus and immediately started sodomizing each other (I suspect Cain and his offspring, but Adam in his fallen state could have been affected, too).

Without an anus you do not need to defecate. But, more importantly, you cannot commit sodomy. When there is no receptive orifice, homosexuality quickly dies out. Is this the answer we’ve been looking for? Godly Creation Scientists can now guide the secularists to extract the DNA of this comb jelly and splice its anus forming genes into men. This is such a promising scenario!

But, will it work? Is it possible to manipulate the genome only just enough to make the skin produce anuses everywhere where the gut is filled to the brim? Imagine this: something goes awry and the sodomites learn to produce anuses at will anytime, anywhere! It could happen! Quote:

A new anus every hour or – in the case of teenage sodomites – every 10 minutes. A new pristine hole with an elastic sphincter 6 times every single hour, 144 times a day, 52560 anus/year. This would mean 52560 rectal rapes every year.

Is this path safe? Certainly not, but regarding the spread of Godlessness, it is perhaps our only hope. We have nothing to lose! The sodomites are condemned in any case (1 Timothy 1:10), and this strategy will give them at least a chance to avoid Hell (John 3:18).

As for our future, it is conceivable that the circumstances in Heaven will be quite similar to Eden. Jesus will feed us (Revelation 7:17) presumably with nice foods containing only those nutrients that can be absorbed whole and produce no waste to be eliminated. I am quite sure that these Godly foods include burgers, freedom fries and other favorites of Godly President Trump. We return to the state that contains no anuses. I won’t miss mine!