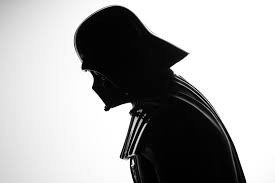 It is almost Easter. Once again the Radiant Lifeless Corpse of Jesus Christ will be temporarily buried in expectation of His Resurrection. For us, True Christians™, the historically accurate account of the Gospel is more than adequate proof but the Heathen majority of the sinner swarm remain suspicious. How to convince them? One of the less known stories of our decades is the so-called “Star Wars Saga”. It is on the surface a fictional account of a lonely hero called Darth Vader fighting against communist rebels, uppity women in order to restore peace and order to a “Galaxy.

In our universe there are no galaxies “far far away” but we have recently established that God in His omnipotence (Revelation 19:6) could have Created several parallel Multiversions of His Creation. Some people think that the “Star Wars Saga” is not fiction but, in fact, fact that took place in one of these Multiversions. Some people also think that Darth Vader could by the Grace of God been there for the Birth of Jesus and not only for the Crucifixion

Who is Darth Vader? He fights relentlessly against lawlessness and false gods called the Jedi. He could be an angel of revenge: one of the Glorious Beings that God sends to destroy and demolish dens of depravity.

1 Chronicles 21:15
And God sent an angel unto Jerusalem to destroy it: and as he was destroying, the LORD beheld, and he repented him of the evil, and said to the angel that destroyed, It is enough, stay now thine hand. And the angel of the LORD stood by the threshingfloor of Ornan the Jebusite.

He could also be simply a wise heterosexual man of another Multiversion, allowed to visit here to bring the Word of God also into his galaxies. How do we know that he was there at the Cross? Because we have eye-witness testimonials of artists who painted the whole Crucifixion scene with Mr. Vader’s spacecraft.

In the image above we can see two starfighters coalescing at the Cross to record the Glorious event’s of Jesus’s perishing. The vehicles are most similar to known “Star Wars Saga” means of transportation

Once again, visitors from another multiversion paying homage to Jesus Christ, and – once again – a starfighter of exactly similar design can be found in the garage of Mr. Vader.

As we can see, there were visitors at the Cross. What about the Manger? Once again, some people think that Mr. Vader could have been there also and they have prepared amazing Nativity scenes depicting that theory.

This is very plausible regarding the presence of multiversion ships at the Cross. Why would they not want to visit Baby Jesus, as well? However, we need more proof. Let us look at the silhouette of Mr. Vader in more detail.

Now, as we move on to the visit of the wise men. As we can see, Mr. Vader could have been the second wiseguy from the left (or right as he is the middle one).

Verily, it is the same helmet. Yet we still have to assess if this is indeed fact. It is.

Matthew 2:9
When they had heard the king, they departed; and, lo, the star, which they saw in the east, went before them, till it came and stood over where the young child was.

A star not attached to the Firmament! Usually the stars are fixed.

Genesis 1:15
And let them be for lights in the firmament of the heaven to give light upon the earth: and it was so.

Jude 1:13
Raging waves of the sea, foaming out their own shame; wandering stars, to whom is reserved the blackness of darkness for ever.

In this case, the star is wandering but it is GOOD as it led Mr. Vader to Jesus. It must have come from another Multiversion. Mr. Vader was there. This is exciting and it will help the nasty youth of today, mostly engaged in sodomistic pleasures, see the Light that is Jesus. Mar. Vader is actually appearing every now and then to harass Papists (as he should be).

If we consider historical evidence, documents, visual materials and our own results we can now conclude that the proof for the historical existence of Mr. Vader is as solid as that of Jesus Christ. A lonely hero who saw the most pivotal points of Jesus’s Life and Death. Let us all pray to be more like Mr. Vader this Easter.