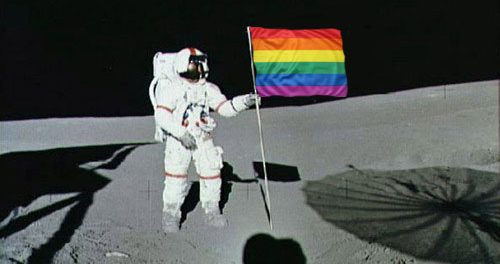 What is the Moon?

It is the lesser light Created after the waters were separated, after the Firmament, after dry land, after green grass and photosynthesis, after the Heaven and the Earth (Genesis 1:1-15). That should be all there is to know. Still, almost exactly 50 years ago, on July 20 1969 two misguided former God-Fearing Americans, Neil (or was it Louis) Armstrong and Edwin “Buzz” (from what did he get the “buzz”?) Aldrin claimed to take a giant leap into the unknown in small steps. We know that the most significant leapinto the unknown is to disregard God’s Commandments and experiment with anal sex (1 Corinthians 6:9) and lose all hope of getting into the Real® Heaven, our Eternal Afterlife.

Fact: the Moon is stuck within the structure of the Firmament (Genesis 1:6). It cannot be too far. It would not be too hard to get there and people have been there. However, these people were not the NASA heretics on July 20, 1969. The evidence that the “Moon landing” was a hoax is overwhelming and fits better with the Biblical narrative than the impossible alternative of the NASAists actually visiting it. This harmonization with the Bible comes from Faith® and Prayer. Let us look at the physical evidence now.

Psalms 136:9
The moon and stars to rule by night: for his mercy endureth for ever.

Why could the abused Proud American flag wave and fap if there was no air? It should be impossible!

Isaiah 19:6
And they shall turn the rivers far away; and the brooks of defence shall be emptied and dried up: the reeds and flags shall wither.

How is it possible that the shadows point at different directions without artificial lighting? This means that the “landing” was filmed before a live studio audience probably by Stanley Kubrick, as many people believe. This will lead to God’s anger.

Isaiah 30:30
And the LORD shall cause his glorious voice to be heard, and shall shew the lighting down of his arm, with the indignation of his anger, and with the flame of a devouring fire, with scattering, and tempest, and hailstones.

There are many other things to prove the hoax, as well. For instance, the Moon is supposedly covered in dust and the “Eagle” vehicle supposedly landed on “thrusters”. Why is there no crater?Moreover, why did Neil Armstrong confess that the “landing” was a hoax if it wasn’t?Quote:

That means it was a lie and that Mr. Armstrong did not get into Heaven during the alleged trip, nor after his death.

Matthew 5:28
But I say unto you, That whosoever looketh on a woman to lust after her hath committed adultery with her already in his heart.

Once more, science was only trying to alienate people from Jesus. Why would they bother otherwise? Surely they must have known that Mr. Adolf Hitler had visited the Moonon the Firmament decades before?Quote:

Hitler never claimed that there was no air on the Moon, so the flapping of the Nazi flag can be understood within that context. This is, on the other hand, a dirndl, a decent female dress from Germany.