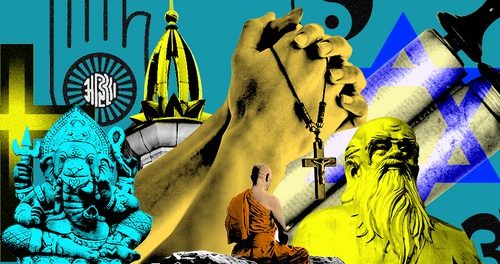 The following is an ongoing research into false religions and cults. Please consider adding new additions by registering to the forum. Landover Baptist Church welcomes the Saved.
Amish
Submitted by: Mrs. Rogers
Worship: Hard work, mules, horses, and Satan.
Trivia Fact: The Amish think that they are saved through hard work and eschewing God’s gifts of electricity and modern technology. If God didn’t want us to have electricity, He wouldn’t have made lightning out of it, and He certainly wouldn’t have told Thomas Edison how to make electricity by rubbing two magnets together.Asatru (Asstrue – an obvious reference to the copious amount of anal sex in their rituals)
Submitted by: Pastor Nerue Gargalo, JustAGuy
worship: The Mighty Thor, a character created by Stan Lee and Jack Kirby in 1962. They also worship the later characters, Thor’s evil half-brother Loki, Heimdal, Baldur, Sif, and Odin. But most important is the so-called “All-Father”, Satan himself.

Atheists/agnostics
Submitted by: the
worship: Satan and believe in the religion of Evolution and Science

Australian Abrollers
Submitted by: Pastor Nerue Gargalo
worship: Bunyips — which are demons in the form of a giant marsupial badger, and Satan

Bahai (Be high)
Submitted by: FUNdaMENTAL
Definition: Basically the same thing as the Unitarians, except they claim GOD told them to believe anything they want to.
Worship: Some guy named Bahulla Balooga, and Satan

Being f***ing decent to others despite our differences. (BFDtodod)
Submitted by: VGrid101
worship: Satan

catlicks (catlicks)
Submitted by: the
worship: Satan and Mary

Deism
Submitted By: The Enlightenments
Worship: The “dual nature” of Satan.
Trivia Fact: This “religion” was invented by Thomas Jefferson solely as a ploy to keep references to Jesus out of the wicked U.S. Constitution.

Daoism/Taoism
Submitted by: SifuPhil, with additional information provided by Petal, Tim Tungtalker, and Glendora Christianson.
Definition: A pack of strung-out junkies perfoming Tai Chi, drinking Chai Tea, smoking pot, drinking beer, sleeping with every woman in town, drinking rum, and shoving bananas in various orafices. They claim to achieve everything by doing nothing and they believe in Ying Yan Yuck Yoo, the circle, half black, half white, half witted.
Worship: Nothing, everything, nature, and Satan.

Discordianism (Disco Accordionists)
Submitted by: Pastor Billy-Reuben
Definition: Wannabe atheists who pray to a Greek goddess named Eric and think that saying fwords while stroking their penile glands is the way to salvation.
Worship: Eric, the number 23, and Satan.

Druidism (Drooish)
Submitted by: Mrs. Rogers
Definition: Bunch of sad English gits dress up in the local drama groups’ plastic chainmail, then run around the countryside waving cardboard swords at each other.
Worship: Stonehenge, Satan.

Free masons jars
Submitted by: TemplarPHI
Definition: An ancient society of old men who think they can unravel the secrets of the universe by drinking liquor and playing poker for two hours every Wednesday night and who don’t realize how stupid they look in robes.
Worship: Archways, elevators, the letter ‘G’, and Satan.

Goddess worship (Godless worship)
Submitted by: More Saved Than Thou
Beliefs: Basically, the opposite of whatever the Holy King James Bible teaches. This is particularly true in the area of male-female relations; in addition, since the Bible attaches such importance to eating meat, goddess worshipers tend to be vegans.
Practices: Hating men; channeling through crystals (Satan’s cell phones)
Clergy: Homeresses who are bitter about not being men, so they buy all of their clothes at Steven Windsor Big and Tall Men.
What they worship: The goddess (that is, Satan in drag)

Hindus (Hindaloos)
Submitted by: Pastor Billy-Reuben
worship: thousands of individual Demons, each masquerading as a god, and Satan.

Hitchhikers in the Galaxy
Submitted by: Pastor Isaac Peters
Description: People with no lives who have chanced upon a book and now parrot quotes from that book to explain everything in their dreary existence.
What they worship: The number 42, and Satan.

Hong Feng Shooey
Submitted by: More Saved Than Thou
Description: The ancient Oriental art of arranging your furniture so that Satan can move about more easily.
Clergy: Overpaid homer interior decorators; overpaid “postmodern” (i.e., homer) architects.
What they worship: Qi, which is a Chinese nickname for Satan.

Metropolitan Community “Church”
Sumbitted by: More Saved Than Thou
Description: A “church” that preaches have-a-nice-day Unitarianism to homers.
History: Founded by Troy Perry, who was so far out that not even the Pennycoastals wanted him around anymore.
What they worship: Leftist politics, rug-munching, and Satan.

Mithraism (Mythicallism)
Submitted by: Mrs. Rogers
worship: Mithras, son of Acura Mazda (see Zoroastrians), referred to as ‘the Light of the World’ by his demonic followers. This ‘religion’ is an obvious Satanic mockery of Christianity. According to this ridiculous myth, Mithras was born of a virgin, said ‘I am the way and the light, and only through me can ye be saved.’, went around performing miricles, held a last supper with his followers, and died to save mankind but was resurrected and ascended into Heaven. Some of the religious practices include ritualistic baptism, drinking wine and eating bread to symbolize Mithras’ blood and body, holding Sundays sacred, an an annual celebration of Mithras’ birth on December 25. This religion was popular among the Roman soldiers that were in charge of suppressing Jewish revolts between 200 BC and 70 AD.

Moonies (Loonies); official members of the Unification (Loonification) Church.
Submitted by: JonFish85
Worship: The sun, the moon, Sun Myung Moon, and Satan.
Trivia facts: Despite their gruesome recruitment methods (eg, threatening to cut off their target’s quivering fingers if said target refuses to sign up for Korean 101), many moonies are surprisingly sensitive about being called “moonies”, as it offends their delicate moonie sensibilities.

Mormons
Submitted by: Pastor Billy-Reuben, LSD Joe
Definition: Rural folks who believe that salvation can be had by marrying all of one’s female cousins and wearing goofy underwear.
Trivia fact: Believe that Jesus came back as a gunfighter in the old west.
worship: Nehi grape soda and Satan.

Muslims (mudslims)
Submitted by: the
worship: the Moon, although they are really bowing to Satan, who told them to worship the Moon

Presbyterians, Lex Lutherans, Baptists Other Than Landover Baptists, and Methamphetadists
Submitted by: Pastor Billy-Reuben
worship: think they worship Jesus, but because of their false, non-Baptist doctrines, they are so twisted around that they are really worshipping Satan. (I realize that “false” and “non-Baptist” are redundant, I’m just trying to drive the point home, praise Jesus!)

Puritans
Submitted By: Moonflower13, Brother Dave
Definition: A group of English Heretics who think they are saved by good works and drab clothes.
Worship: corn and Satan.

Raelians (Ray-Aliens)
Submitted by: Pastor Billy-Reuben
worship: a group of Demons that pretend to be aliens from “other planets”, when everyone knows that there are no other planets, and those lights in the sky are just that — little lights a few miles up that can fall right to the ground if Jesus sneezes hard enough. See Rev 6:13.

Rastafarians (Pasta-Reefermans)
Submitted by: Friar Waire
worship: Satan — they are to stoned and lazy to worship anything, but because Jesus said, “He who is not with me is against me”, they worship Satan by default.

Reiki Followers
Submitted by: Brother Mike
Description: So called ‘energy healing’ which teaches satanic Hindu concepts as well as satanic Pagan concepts. The healing is perverted, they ‘lay hands’ on each other which is just an excuse to practise homersexuality and adultery.
History: Founded by some homersexual Japanese gook.
What they worship: Angels and a new age God which is of course satan and his demon minions in disguise.

Salvation Army
Submitted by: JonFish85
Definition: Elderly panhandlers with a fetish for army uniforms. These degenerates sing and play tambourines for money, usually at the entrances of Godly Corporations™.
Worship: Musty old clothing, musty old people; but both old and new money.

Satanists
Submitted by: the
Worship: Satan

Scientologists
Submitted by: Pastor Billy-Reuben
worship: Satan and Elron Hubbard is his prophet.

Seculiar Humanists
Submitted by: Pastor Billy-Reuben
worship: themselves, and Satan.

Shinto
Submitted by: Mrs. Rogers
Definition: The Japs, their minds muddled by Confucianism (i.e., Satanism), begin making tiny paper swans out of serviettes (origami) to appease their dead relatives. This is when they are not busy worshipping the Jap royal family (i.e., Satan), or performing ritual dances (i.e., possession by Satan).
Worship: Dead relatives, and Satan.

Sikhism (Sick-ism)
Sumbitted by: More Saved Than Thou
History: A group of demon-possessed people in India weren’t sure whether they could outrage Jesus more by becoming hindaloos or mooselimbs, so they picked the worst aspects of both religions.
Beliefs: Their false god commands them to wear turbans, grow scruffy beards, and manage gas stations.
What they worship: Ceremonial daggers and Satan.

Unitarians
Submitted by: Born Again Bob
worship: Satan. This religion represents a unification of every false religion and their followers are allowed to choose their own paths to Satan.

United Church of Christ
Submitted by: Larry Lee
The once-glorious True Christian™ Church of the Pilgrims and Puritans (who can forget “Sinners In The Hands Of An Angry God”) has, in our time, so utterly embraced Satan that even the members of the UCC Divine Revelation that their Church’s initials stand for ‘Unitarians Considering Christ.’ Furthermore, these debased hellhounds advocate the ordination of women and even install women as the pastors of congregations that include men. Lastly, I hope you’re sitting down this malignant group welcomes gays and lesbians into their worship services and communities. Jesus weeps! Recently, they were in the news because the television networks refused to air their recruitment tape.
Worship: Satan

Various agricultural religions of antiquity
Submitted by: Pastor Isaac Peters
Beliefs: To ensure a good harvest, a deity had to be incarnated in human form every year just to be sacrificed. Adherents never quite got around to explaining why all that was necessary; surely an omnipotent God could ensure a good harvest just by saying, “Let there be a good harvest.”
What they worshiped: Crops, the seasons, and Satan.

Voodoo
Submitted By: Moonflower13, Brother Dave
Definition: Voodoo combines the worst elements of two other Satan-glorifying religions, Witchcraft and catlickism. Believers are able to call upon demons to turn corpses into zombies under their control.
Worship: the Pope, toy dolls and Satan.

Wiccans (wickedans) aka Witches
Submitted by: the
worship: Satan

Zoroastrians (Zorro-Astrologists)
Submitted by: Sri Krishna Chapata
worship: a demon named Acura Mazda, and Satan. This religion was created by Satan (HaShatan) solely to mock the religion of the Israelites while under Babylonian captivity, adding insult to injury.