God tests even the most faithful. Just ask Job — or Roper Crossburn.

At the start of the year, the beloved singer-songwriter was riding high. His latest album was flying off record store shelves and his tour was kicking off in style. A Crossburn gig was an oasis of good sense and cheer, free from the panicked obsession with social distancing that gripped much of the nation. Not only were masks not mandated, they were banned outright, with burly security guards yanking them from the faces of those who sought to dampen the mood.

Then, without warning, a respiratory illness left the country icon fighting for his life. Doctors delivered a diagnosis of COVID-19… but don’t tell that to Roper, who maintains that the virus is fictional.

“COVID ain’t real,” he says. “It’s a hoax drummed up by the Satanic pedophile elite to control the masses. Everyone with half a brain knows that.”

Despite spending two weeks on a ventilator, he remains skeptical about the severity of his condition.

“They told me my blood oxygen levels were so low, it was a miracle I was still alive. Now I believe in miracles, but to me, that doesn’t make sense. Oxygen is air. It’s in your lungs. Blood is liquid. Saying your blood has oxygen in it… well, it sounds impossible, right? Do they mean it’s fizzy, like beer?”

Crossburn shakes his head, a wry expression creasing his face.

“I’ve been in many a dust-up, and I’ve tasted my own blood. Believe me, there weren’t no bubbles in it. I’d have noticed. So if you ask me, those docs are full of crap.”

It took months for him to regain the dexterity and mental clarity needed to do what he loves — that is, of course, to make music. In the meantime, he focused on other hobbies, such as a newfound passion for painting. With the help of his favorite Tennessee whiskey, his skills as a troubadour began to return.

As for what sickened the musical giant? He has his own theory, informed by a social media feed that leans firmly to the anti-establishment right.

“My guess is, someone stuck me with a needle full of that Godforsaken vaccine. That can happen, you know. It’s how the fags spread AIDS to normal people.”

If true, this would imply a large-scale attack against Crossburn and his fans, as dozens of concertgoers succumbed to a similar illness. A chilling thought indeed.

Sadly, the troubles he faced were not only medical, but legal as well — an arena to which he is no stranger.

His last album, A Prayer for Billie, received a glowing review in the church newsletter, but it also stirred controversy due to its laser focus on the teen pop idol Billie Eilish. Some, including Eilish herself in a fiery tweetstorm, accused Crossburn of predatory intent. When the crooner attempted to mend fences in a midnight visit to her Los Angeles home, he was met with a restraining order and a stay in the county jail.

He has now put the Eilish affair behind him.

“That little whore is as good as dead,” he says. “Dead to me and dead to God. I reached out to her with a message of hope, of salvation, which she rejected.”

He leans forward, his voice low and breath thick with tobacco.

“The Lord made her [body] with boundless craft and care to be a temple of life’s creation. Not anymore. Now it’s an abode of devils, unfit for any decent man to enter. A foul wind blows through those curtains of flesh.”

Lip curling in disgust, he ashes his cigar onto the floor and stamps his foot on the residue.

“A year from now, she’ll be under dirt. Good riddance.”

You now know much of the story that led to the birth of Crossburn’s upcoming release, Unmasked Melody. But what of the album itself? 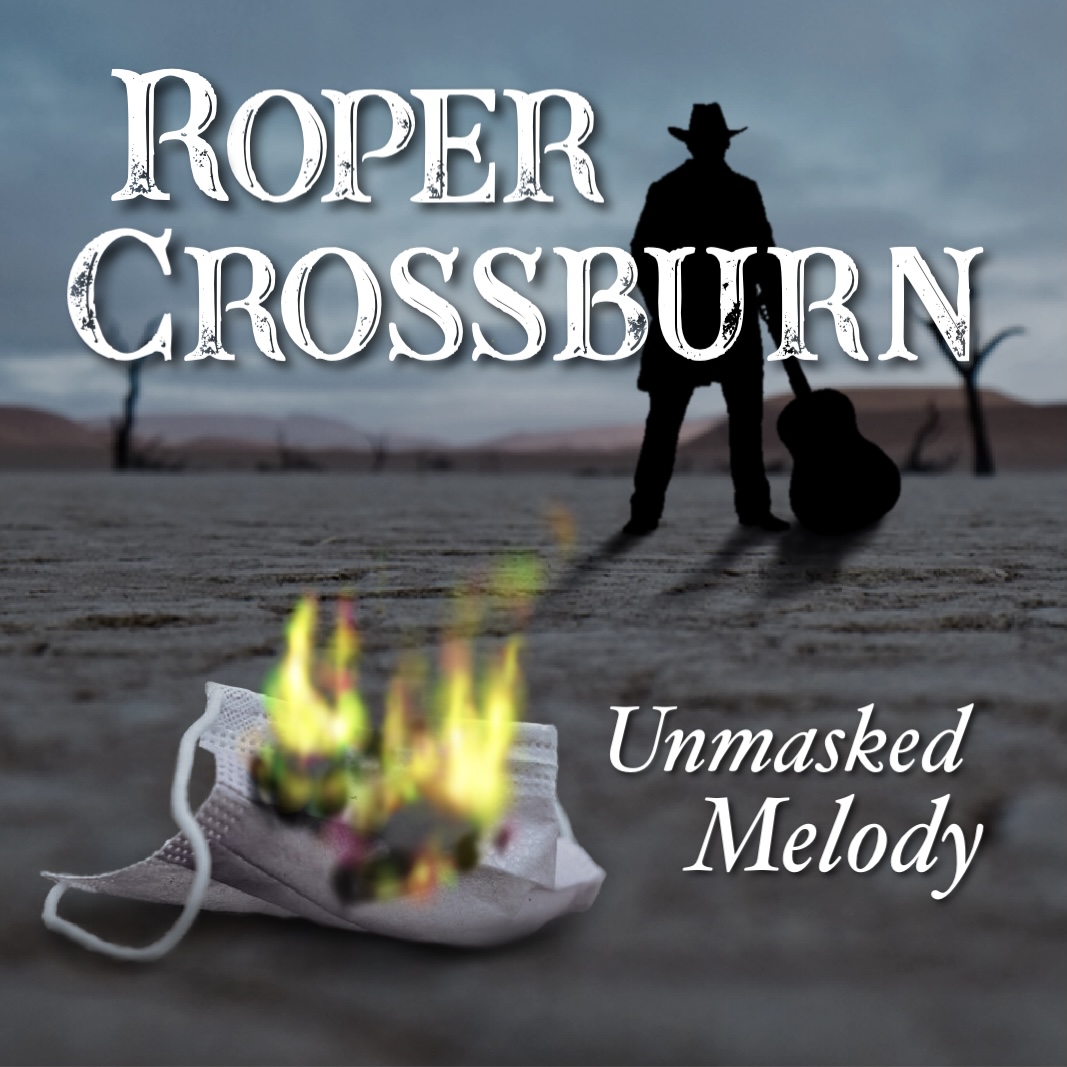 As its title suggests, the bulk of the lyrical content flouts the pandemic orthodoxy. There are songs aimed at Fauci (“Phony Tony’s Stinkin’ Baloney”), masks (“Cloth Idol”), and the brouhaha over variants (“It’s All Greek to Me”). It will come as a surprise to none that Roper also has plenty to say about the vaccines, with titles like “Jab of Death” and “We Don’t Needle This” making his views plain.

Not every track is COVID-centric. On “Bill Kiden”, he trains his sights on an aging leader whose senility has rendered him a global laughingstock. “Religion of Pieces” reminds us that Crossburn’s feelings about Islam have hardly softened over the years, and “Repent Now or Dilator” does the same for the LGBT community. “Trump Won”… well, that one is self-explanatory, wouldn’t you say?

(Originally on the album was “The Kenosha Kid”, which mythologized Kyle Rittenhouse as an Old West gunslinger. Roper pulled the song after Rittenhouse spoke in support of Black Lives Matter.)

It all adds up to classic Crossburn — meaning it’s not to be missed. You can experience it for yourself very soon, as Unmasked Melody is slated for release on Christmas Eve.

Have the trials and tribulations of the past year changed Crossburn’s message? Not at all, he says.

“It’s been the same since day one. Obey God. Read the Bible and do what it says, or go straight to Hell. People think it can’t be that simple, but it is.”

He walks over to the fireplace and picks up a painting — one of his own. It depicts a shirtless, muscular Jesus Christ driving a crucifix into the back of an unknown man, whose face bears his shock as the tip erupts bloodily from his chest.

“Jesus is gonna kill you” Roper states plainly. “That was the name of one of my records because it’s the surest thing in the universe. What happens next depends on whether you’re right with Him.