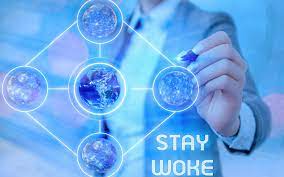 The True Christian Guide to The Great Awokening

First the good news: Atheism is dead! Next the bad news: True Christian style and rhetoric are currently out of fashion. Now more good news: the core experience and influence of True Christianity is stronger than ever, as long as you can learn a few new buzzwords!

And what do we call this, the miracle we’ve long been praying for?

Consider it a fresh paintjob for religion. Everything looks new and shiny and unfamiliar, but don’t worry, underneath it’s the same religion doing the same things as before! Best of all, this time we get to ignore the first amendment and establish a state religion. We are already preaching in public schools!

To prevent overwhelm, here is a chart of some major Woke sects, and which buzzwords, slogans, and shibboleths they use to separate The Elect from the unsaved trash.

Christianity starts with Original Sin, where we teach children to feel guilty for being born. After letting them stew in self-loathing for a while, we re-direct the anger towards guilty devils (Satan literally means “the enemy”).

To prevent direct resistance, smarter religions tell people to be afraid of a devil. Some Christians are afraid that every teen-ager is a Satanist, and panic when a black cat crosses their path, and so on. Wokism makes black people think that every white person wants to lynch them, and makes then panic when they see the police. Hate has a way of making people rally around their abuser. Nobody notices that the Taliban and feminists are on the same team when it comes to convincing women that if they go outside they will be raped.

If the children fail to hate, they will start asking questions. This is where the ancient Myths come in, conveniently happening long before anyone’s living memory. These tell the story of how everything used to be good before The Devils led to The Fall. In the old version Adam and Eve got too curious, ate a forbidden fruit, and get kicked out of the Garden of Eden. And as if that’s not bad enough, next The Jews/White People killed Jesus.

After all the ancient history lessons cause the children to forget whatever their question was, it’s time to get back to the emotional manipulation again.

Sacred Victims are your Martyrs, the updated Christ On The Cross. The children are told that they are guilty of causing the martyr’s suffering, and the only way to stop is to do what the elect say. However, the Elect tend to lead cushy, martyrdom-free lives, so it’s better to conscript random people to get martyred, whether they want to be involved or not. Did George Floyd want a mural on every street declaring him the Replacement Jesus? No, he was just looking for another pregnant woman to hold hostage to steal more money for fentanyl, but he can’t complain because he’s dead.

Supernatural Beliefs are the same as scientific beliefs, only instead of proving them with evidence, we prove them by getting really, really angry when people ask for evidence. Say “This is my Lived Experience, I can ignore science because I have Other Ways Of Knowing“.

If your anger failed to deter a critic, and they won the debate anyway, this is where Taboo Facts come in. Basically, you find out what your critic said to win the debate, and then make it illegal to say it again. A fact can be both sacred and taboo at the same time – for example, sacred Muslim Holy Books state that Mohammed was a pedophile, but it’s still taboo to say so, at least in the presence of someone who thinks that pedophilia is a bad thing.

The Fortress Of The Elect

The Elect are the self-appointed saviors. How do you join The Elect? Do you have to win an election? Survive scientific peer review? Provide the best product or service at the best price, as chosen by the marketplace? No, no and no. Religion does not work that way.

Because The Elect don’t have to win elections, debates, or pass any real-world test, everyone will try to join. You need a way to always be separating your insiders from the riff-raff. Thus, the fortress of The Elect needs to be defended. Secret handshakes have to be learned. Have people practice weird rituals that atheists find hard to do with a straight face. Invent and constantly change secret passwords that are needed to pass the gates. Booby-traps, in the forms of taboo words, need to be created and moved around. Sometimes a secret password can itself be turned into a booby-trap. For example, “negro” was once the only acceptable term, though if you said it with a poor person’s accent it was taboo. Now “negro” itself is taboo. “Colored people” switched from password to taboo, even though it’s almost identical to “people of color”. If a few dyslexics end up getting booby-trapped, so what? The more random, spectacular, and unfair the booby-traps are, the better they will be at detering wannabes from joining The Elect.

I won’t go on about the various words used in Christianity, because there are a lot, and they change depending on the sect and church. The point is that religion teaches that there are magic words: evils ones are profanity, and good magic words are prayer and praise.

If someone says “all this talk is pointless, it’s actions that count”, start with the Magic Rituals. Seemingly pointless actions, like kneeling and eating a wafer, are magic when The Elect says they are.

So, while True Christians might need to update our secret handshakes, passwords and taboos, our actions will be the same as always.

As True Christians we use rumors and/or character assassinations of people accused of social faux pas, and we do everything we can to get these nerds punished. We consider every bystander to be an accomplice to the crime if they refuse to be conscripted into our crusades, especially if they utter a profanity like “due process”, “presumption of innocence”, or “collateral damage”.

We will continue to support bullying, mobbing, swarming, and trial-by-popularity contest. Because the legal system requires evidence and rule of law, we will bypass it to focus on destroying our targets’ careers, families, social lives, and sanity. Remember, the First Amendment says you still live in a land of free, honest, easy communication, as long as the censorious reign of terror is carried out by a force that is technically not government.